RAPID RESPONSE TEAMS FOR EPIDEMIOLOGICAL SURVEILLANCE: MITIGATION OF THE CORONAVIRUS PANDEMIC IN PERU, 2020

On January 30, 2020, with more than 9,700 confirmed cases in China, the World Health Organization declared the coronavirus outbreak to be a public health emergency of international concern(1). At the end of January, the National Center for Epidemiology, Prevention, and Control of Diseases (CDC-Peru) of the Ministry of Health prepared the “National Plan for Preparation and Response for the Introduction of the coronavirus 2019-nCoV”, where one of the strategic components was to strengthen the epidemiological response through mitigation actions that allow early identification of cases, diagnosis, follow-up of contacts and identification of people with risk conditions(2).

In highly contagious infectious diseases whose treatment is not known and does not have a vaccine, community mitigation measures are the first instance of defense. The objectives are to delay the exponential growth of new cases and shift the epidemic curve to the right, to “buy time”, delay the epidemic peak, allow the preparation of the response and strengthen the supply of health services(3). The CDC-Peru in this mitigation phase activated the Rapid Response Teams (RRTs), which were made up by an epidemiologist from CDC-Peru who performed the identification of cases and the epidemiological investigation in addition to leading the team, a biologist or a medical technologist from the National Institute of Health (INS) who performed the sample collection, and a driver who was in charge of mobilizing the team and ensuring their safety. In this first phase (from the declaration of a pandemic by the WHO to the detection of the SARS-CoV-2 index case), the RRTs were assumed with direct human resources from the CDC-Peru and were in charge of the intervention of cases detected through of epidemiological surveillance, syndromic surveillance, and rumor surveillance.

The second phase began with the detection of the first case, and it was decided to expand the number of RRTs of the CDC-Peru, coordinating the response in a complementary manner with the RRTs of the Direcciones de Redes Integradas de Salud (DIRIS) of Lima, that allowed to expand the coverage for the identification of new cases and to follow up the contacts identified to initiate the epidemiological blockade(4). At the same time, it interacted with the Joint Command of the Armed Forces and the National Police, who joined the RRTs facilitating mobility and drivers, relocating the operations center to the National Stadium, which became the operational point, where they were integrated. teams and intervention activities were conducted. (Figure 1)

Due to the lack of pharmacological experiences, other actions were taken by the population during the pandemic. These measurements were isolation, voluntary quarantine at home, social distancing of people over 70 years of age, suspension of mass meetings, the closing of schools and universities, and the social distancing of the entire population(5). The first two were carried out by the RRTs; while the other four were government decisions based on epidemiological surveillance of cases, deaths, and the availability of health services to respond to critical patients. The RRT strategy based its mitigation interventions in the community as the first line of defense against this disease, focused on slowing down cases through reducing the reproductive number of the disease (R0) but not essentially on stopping the spread of the epidemic (R0 more than 1), which means that the delay in the duplication of cases reduces the maximum demand for medical attention and allows time for the adequacy of health services to attend to severe and complicated cases that require hospitalization, many of them intensive care(5).

The RRTs are responsible for deciding the isolation facility for suspected cases of SARS-CoV-2, recommending preventive measures that they should take such as quarantine to restrict the movement of people who were exposed to confirmed cases. This strategy associated with social distancing of people at higher risk of contagion could reduce the maximum demand for medical care by 2/3 and deaths by half. Likewise, the RRTs carried out epidemiological intervention in concentrated populations at risk of spreading this disease.

Early detection strategies based on epidemiological surveillance appear to be one of the strengths of the Ministry of Health. However, the component of clinical follow-up and compliance with mitigation measures by the population is significantly associated with the perception of risk of the disease, idiosyncrasy, and culture, which can generate variations in the impact of the measures to reduce mortality in this pandemic. The impact of these two variables could partially explain the subsequent behavior of the pandemic in Peru, added to the resolution capacity of health facilities. 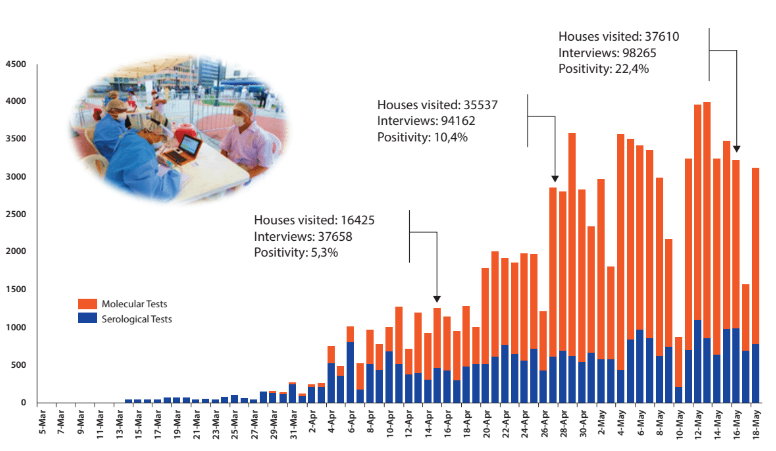 Figure 1. Positive cases by diagnostic tests and activities carried out by ERR. 14 May 2020. CDC MINSA.