FACTORS ASSOCIATED WITH LEFT VENTRICULAR HYPERTROPHY IN ADULTS LIVING AT A HIGH ALTITUDE CITY IN PERU.

Introduction: Left ventricular hypertrophy has been described in people who live at high altitudes. Objective: To determine the factors related to left ventricular hypertrophy (LVH) in adults. Methods: An observational, cross-sectional and analytical study was carried out in the Echocardiography Laboratory of the Hospital Regional Docente Clínico (HRDCQ) Daniel Alcides Carrión (HRDCQ) of Huancayo, Peru at 3,259 m.a.s.l. The sample was determined with a formula and the sampling was simple random. The inclusion criteria were: be 18 years of age or older; have an echocardiography study with a diagnosis of LVH. The exclusion criteria were: having valvular disease, congenital heart disease, dilated cardiomyopathy, acute cardiovascular event, and cardiac arrhythmia. The data were collected in a file. For the statistical analysis, the X2 test, student's t test, binary and multivariate logistic regression, odds ratio, 95% confidence interval were applied. P <0.050 was considered significant. Results: 488 patients were included, the average age was 64 years (range: 18-98). In 58.9% (370) they were women. The factors related to LVH were arterial hypertension (OR=5 .31; 95% CI=3 .27 - 8.61), age older than 60 years (OR=2 .94; 95% CI=1 .93 - 4, 50), diabetes mellitus (OR=3 .33; 95% CI=1 .15 - 9.79), and obesity (OR=2 .21; 95% CI=1 .16 - 4.19) compared to patients without LVH. In patients with LVH, a higher left atrial volume index and left ventricular diastolic dysfunction were found. Conclusions: The factors related to LVH in adults were arterial hypertension, advanced age, diabetes mellitus and obesity.

Left ventricular hypertrophy (LVH) is an independent risk factor for cardiovascular morbidity and mortality. LVH is a biomarker of cardiac damage that occurs as a pathological adaptive response to high blood pressure overload or other non-hemodynamic changes, and is due in part to cardiomyocyte hypertrophy(1-4). Multiple factors associated with the occurrence of ventricular remodeling and LVH have been reported, among which reference is made to advanced age, race, gender, genetic factors, arterial hypertension, diabetes mellitus, chronic kidney disease, obesity, metabolic syndrome, apnea obstructive sleep, sedentary lifestyle, dietary salt intake and increased triglycerides (2,3,5-8).

The presence of type 2 diabetes mellitus is reported to increase the risk of LVH by approximately 1.5 times more (9). At the heart level, the hypertrophied myocardium shows fibrosis, alterations in the coronary circulation, and apoptosis of the cardiomyocyte, which can lead to heart failure, myocardial ischemia, and arrhythmias (2). On the other hand, LVH was associated with a more than 3-fold probability of myocardial ischemia (OR = 3.27) in patients with angina pectoris and non-obstructive coronary disease (10), in addition to the risk of mortality in individuals with LVH is 3 to 4 times higher than in people without LVH (11).

The presence of LVH in the population that lives in height could be related to various modifiable factors. Its determination will affect the timely and adequate control of this disease. However, in patients who live above 3,000 meters above sea level, the factors associated with LVH have not been described with the frequency reported at lower altitudes. It is likely that there could be variations in those chronically exposed to hypobaric hypoxia of the height. Therefore, the objective of this study is to determine the factors associated with LVH in adults.

Observational, cross-sectional, an analytical study based on the patients who attended the Echocardiography Laboratory of the Daniel Alcides Carrión Regional Teaching Hospital (HRDCQ) of Huancayo from January 2017 to June 2019.

The population was made up of 5,687 patients evaluated during the study period. The sample size was determined using Epidat version 3.1, considering a frequency of the event of interest of 50% and 5% precision(4,12), requiring a minimum sample of 360 patients. The selection of the sample was carried out by means of simple random probability sampling. Patients 18 years of age or older and with an echocardiography study were included. Patients with incomplete echocardiography study, valve disease diagnosis, congenital heart disease, dilated cardiomyopathy, acute cardiovascular event or cardiac arrhythmia were excluded.

Diastolic dysfunction of the left ventricle (LVDD): It is the deterioration of the isovolumic ventricular relaxation and the decrease in the compliance of the left ventricle that was determined by having three or more of the following criteria: septal tissue velocity e´ <7 m / s and/or lateral tissue velocity e '<10 m / s; E / e 'ratio> 14; left atrial volume index> 34 ml / m2; tricuspid valve regurgitation velocity> 2.8 m / s(13).

Diabetes mellitus: having fasting blood glucose greater than 125 mg/dl, or a normal value with antidiabetic treatment and a history of diabetes(14,15).

Body mass index (BMI): determined by the relationship between body weight (Kg) and height (m) squared, a BMI between 25 and 29.9 is considered overweight and 30 or more obese (14,15).

Sedentary lifestyle reports that they cannot do physical activity for more than 30 minutes per day (15).

The reports of the HRDCQ echocardiographic examinations registry were reviewed, which were reflected in a data record sheet where: age, gender, clinical characteristics and demographic associated factors were included. LVH, relative ventricular wall thickness (GRP), left atrial volume index (VIA), and LVED were determined. The study was performed with a General Electric Vivid S50 echocardiography with cardiology software, with a 2.5 MHz transducer. Echocardiographic measurements were performed according to the guidelines of the American Society of Echocardiography (13).

The Microsoft Excel program was used to process and enter the data. For the analysis, the statistical analysis was used in the statistical package for social sciences (SPSS) version 25. The Kolmogorov Smirnov test was used to evaluate the normal distribution of the groups. Continuous data are expressed as mean (X) and standard deviation (SD), while categorical variables are reported in frequencies and percentages. The student’s t-test was used to analyze whether there were significant differences between the quantitative variables. The chi-square test was used for the comparison between categorical variables. A value of p <0.05 was considered significant. For the hypothesis test, binary and multivariate logistic regression was used. Qualitative variables with very small frequencies that made their analysis difficult were excluded from the multivariate model, the odds ratio (OR) and the 95% confidence interval (CI) were found.

During the research process, the bioethical principles of research in humans have been respected. The data collected was handled with the reserve and confidentiality of the case. The Research Ethics Committee approved the research project of the HRDCQ of Huancayo.

Table 2 shows that the factors associated with LVH compared to patients without LVH were over 60 years of age, arterial hypertension, obesity, and diabetes mellitus. Likewise, there were no differences in relation to gender, overweight, dyslipidemia, and sedentary lifestyle.

Table 1. Demographic, clinical, and echocardiographic characteristics of the patients 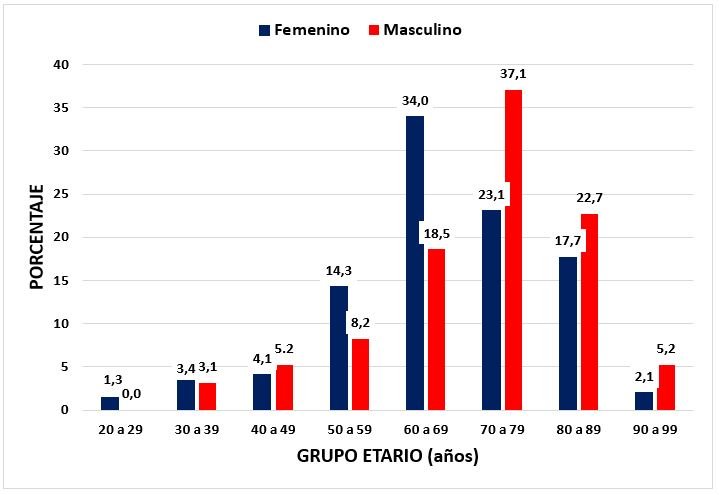 Figure 1. Distribution of patients with left ventricular hypertrophy according to age and gender

LVH is an independent predictor of cardiovascular and general mortality (16). LVH is an adaptive response of the heart to physiological or pathological stimuli, classified as concentric and eccentric, is caused by pressure or volume overload (17). There are mechanical, neurohumoral, and genetic factors that promote LVH, which act on the left ventricular mass and geometry (18,19). Body mass index (BMI) and systolic blood pressure are independent factors of LVM and both factors interact (20). In our series, both factors were associated with elevated levels in patients with LVH compared to patients without LVH. Likewise, the increased left atrial volume index has been reported to be associated with LVH and LV diastolic dysfunction (21). In our casuistry, we also find similar relationships.

Age by itself is a great predictor of cardiovascular disease. Increasing age makes cellular, structural, and functional changes in the heart. These maladaptive changes are more accentuated in older adults with a high degree of frailty (22). On the other hand, there is evidence that the number of ventricular myocytes decreases with age due to apoptosis in men but not in women (23). According to Cuspide et (24), evaluating 3752 hypertensive patients has observed that LVH and severity increase with age. Valarezo-Sevilla et al. (25) evaluated 91 diabetic patients and reported a relationship between LVH and age with the highest prevalence in older adults. We found very similar findings in our series, LVH becoming more pronounced after 50 years of age, with a predominance in women between 50 and 69. While between 70 and 99 years old, LVH is more frequent in men than women in a ratio of 1.51 to 1.

In a previous study, a higher frequency of LVH was reported in women than in men (43, 4% vs. 32.1%) (24). Another study found a higher prevalence in women in relation to men (47.1% vs. 26.9%) in people 60 years of age and older (26). We also found a higher frequency of LVH in women, but only in those under 60 years of age, which can be explained by the greater influence of visceral obesity on ventricular mass and ventricular geometry (18).

High blood pressure is one of the most important causative factors of LVH. The prevalence of LVH in hypertensive patients ranges between 20% and 92%, this variability being related to the method and the diagnostic criteria used, as well as the demographic differences and comorbidities that the study population presents, such as increasing age, gender, genetic factor, diabetes mellitus, obesity, chronic kidney disease; the duration, severity and lack of treatment of arterial hypertension and according to the diagnostic criteria used (11,27-30). Likewise, LVH has been reported in normotensive patients with obesity in 13% and increases to more than 75% in hypertensive patients with morbid obesity (2).

In the heart of obese people, there is interstitial fatty infiltration, growth of the cardiomyocyte, and accumulation of triglycerides in the heart’s contractile elements, which contribute to the higher probability of LVH compared to non-obese (32). Overweight and obesity are independent risk factors for LVH in hypertensive patients (32-34). Therefore cardiovascular risk will increase in this group of patients. Gómez et al. (35)reported that obesity is a powerful determinant of LVH (OR = 12.29; 95% CI 2.48 - 60.76). Guerra et al. (34)reported that LVH is strongly associated with a higher body mass index and systolic blood pressure in overweight and obese hypertensive patients. A previous study found a frequency of LVH in hypertensive women with normal weight in 7.1%, overweight in 41.2% and obesity in 66.7%, and overweight was associated as a predictor of eccentric development LVH (OR = 31.82)(16). However, Avelar et al. (36) evaluating patients with severe obesity found a higher frequency of concentric LVH. In our study, we found that obesity was associated with a higher possibility of presenting LVH, but less frequently than previously reported (OR = 2.21; 95% CI = 1.16 - 4.19), showing the concentric ventricular geometric pattern in 90% of the cases and it was more frequent in women with obesity (70%).

A limitation of the study was not determining causality because it was a retrospective design, and the sample was mostly patients who attended the hospital, so its extrapolation to the general population should be taken with caution.

It is concluded that in adult patients, the factors associated with LVH were arterial hypertension, advanced age, diabetes mellitus, and obesity. Likewise, a higher rate of LA volume and LV diastolic dysfunction was evidenced in patients with LVH compared to those who did not present LVH.

Author contributions: The authors participated in the genesis of the idea, project design, data collection and interpretation, analysis of results and preparation of the manuscript of this research work.
Financing: Self-financed.
Conflict of interest: The authors declare no conflict of interest in the publication of this article.
Received: September 17, 2020
Approved: December 4, 2020