Cervical intraepithelial neoplasia (CIN) constitutes a premalignant lesion that precedes the development of cervical cancer. Cervical cancer represents the second most frequent type of cancer that affects women worldwide, annually about 9 million women develop it from which 80% are in developing countries1.

Cervical intraepithelial neoplasia is characterized microscopically by the presence of a series of manifestations that progress from cellular atypia to varying degrees of dysplasia. Among its conformation there are abnormal squamous cells that will be largely eliminated by the immune system, however, this will depend on the degree of cervical intraepithelial neoplasia (CIN).

It is very important to identify the degree of cervical intraepithelial neoplasia; Grade I is a mild dysplasia, which is why it is considered low grade, while Grade II and III constitute high-grade lesions, Grade II as a moderate dysplasia, and Grade III a severe dysplasia that can compromise all thickness of the lining of the cervix, being considered carcinoma in situ.

Among the risk factors involved in the development of cervical intraepithelial neoplasia are: genital HPV infection, where the most common infection mechanism is sexual transmission; It is estimated that approximately 80% of sexually active women at some time in their life will have contact with the human papillomavirus. In general, HPV infection represents the main factor of development, however, there are other factors that have been linked to being described in the literature, which contribute together to the development of squamous intraepithelial lesions at the cervix level and as a consequence they make women more likely to develop cervical cancer, among these factors are age, sociocultural condition, level of health knowledge, number of pregnancies, number of vaginal births, number of sexual partners, characteristics by the sexual partner, alcohol consumption, tobacco consumption, age of onset of sexual activity, hormonal planning, among others2.

Currently, it has been shown that women who present smoking within their background are more predisposed to present atypical cells, as well as develop cervical cancer. According to the International Agency for Research on Cancer (IARC) 62 of the 5 000 components of tobacco have been considered, proving to be carcinogenic, placing cervical cancer among the most associated. It was obtained that there is a greater probability of mortality in 21% of women with cervical cancer and who have a history of smoking, which is why it is important to recognize the intervention of exogenous factors in the onset of cervical cancer1,3.

Lifestyle factors are currently at the center of the prevention and treatment of chronic diseases, including cancer. The objective of this article was to determine the effect of tobacco consumption with the development in women of cervical intraepithelial neoplasia.

71 articles were found, excluding 20 for not being within the last 5 years, 32 because they did not comply with the combination of keywords in their structure, also 3 were excluded because they were not directly related to the subject to be reviewed. In the end, 55 articles were excluded, so there were 16 articles left for this paper analysis, including one article for theoretical and conceptual purposes.

The study selection diagram can be seen in Figure 1 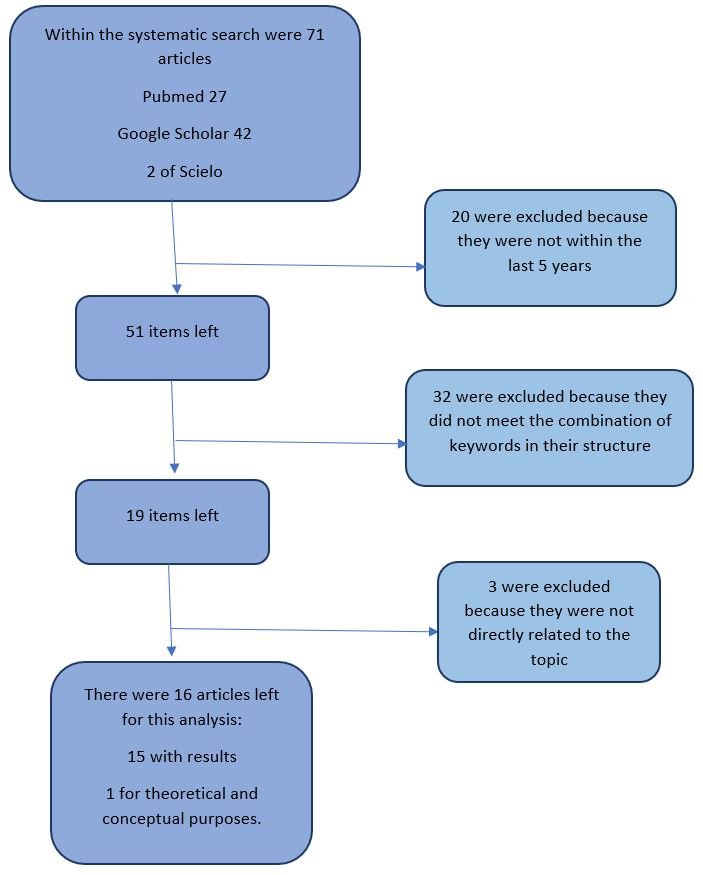 In the work carried out by Sánchez J. et al, a population of 807 patients were studied, of which 629 (77.9%) denied to be smokers and 178 (21.1%) they to be smoke, taking occasional smoking criteria as exclusion criteria. The smoking rate of the smoking patients was calculated, resulting in: 148 (83.1%) had a mild degree of smoking, 20 (11.3%) a moderate degree of smoking and 10 (5.6%) an intense degree of smoking. Regarding the results of Pap smears, 9 (5%) cases presented low-grade intraepithelial lesions, 3 (1.68%) high-grade intraepithelial lesions. At the time of calculating the odds ratio (RM) 1.90 was obtained with a 65% probability for the presence of cellular atypia in smoking women; also, in relative risk the result was 1.58 higher to have cervical-vaginal atypia in patients who smoked while those who did not had a protective relative risk of 0.631.

Fang JH. et al. conducted a study to measure the risk related to the presence of high-grade intraepithelial neoplasia and regarding the changes produced by the human papillomavirus (HPV), as well as smoking, where it was obtained that those women smokers in the long term (more 8 years) and those who were severe smokers (18 or more cigarettes per day) had an increased risk for grade III intraepithelial neoplasia than those women who never smoked, having a HR of 2.31 with a 95% CI, 1,12 to 4,16 4.

The designs and results of the studies are found in Tabla 5.

Through this systematic review it was observed that there is an association between smoking and the development of cervical intraepithelial neoplasia, which has been evidenced by various authors1,3,4,5,14. Cohort studies, cases and controls, as well as cross-sectional studies could be reviewed.

Within cohort studies, it was observed that in the work carried out by Sánchez JM et al. in Mexico, those women who smoked had an increased risk of cervical-vaginal cell atypia; also, Fang JH et al. in China, reported a higher risk for grade III cervical intraepithelial neoplasia in severe smokers1,4.

In case-control studies, the relationship between tobacco consumption and the three degrees of cervical intraepithelial neoplasm could be shown, observing tobacco consumption was present, resulting in one of the factors that increases the risk of intraepithelial cervical lesions in 32% of cases. This effect is greater in relation to the age of onset, whose average age range is between 15 and 19 years, as well as the time of consumption7,9,12.

Interestingly, in a case-control study it was observed that the risk for cervical intraepithelial neoplasia grade II and III decreased in ex-smokers (p-trent = 0.004), showing a benefit in relation to the time they stopped using tobacco7.

Currently, the role of inflammation, within the study of the tumor microenvironment, is one of the main fields of cancer research. There is evidence for a strong link between chronic inflammation and cancer. Inflammation has been implicated in initiation and progression of tumors, as well as elimination of cancerous cells.

Many lifestyle habits produce low but constant levels of inflammation that can increase the risk of cancer. Highlights include food, tobacco, alcohol, infectious agents, obesity, among others. In women, both HPV related to sexual habits and smoking related to socially accepted toxic habits, produce chronic inflammation and meta-inflammation, constituting targets for the prevention and treatment of CIN with Lifestyle Medicine. Numerous anti-inflammatory agents including those identified from natural sources have been shown to exhibit chemopreventive activities.

There is limited publication on clinical trials related to tobacco and CIN. The present work is one of the first systematic reviews on the association between smoking and cervical intraepithelial neoplasia. Our study included an important number of heterogeneous studies. Additionally, inherently it has the recognized limitations of the observational studies.

Despite the widespread recognition of the important role of lifestyle medicine measures and practices as a key component of the treatment and cancer prevention, scant progress has been made in improving the habits and actions of the women population. Working on the preventive model of cancer with Lifestyle Medicine is essential for both the medical community and decision makers in public health.

First of all, we thank God for his blessings and opportunities, as well as the people who supported us in carrying out this work.

Authorship contributions: The authors participated in the genesis of the idea, project design, data collection and interpretation, analysis of results and preparation of the manuscript of this research work.
Financing: Self-financed.
Conflicts of interest: The authors declare that they have no conflict of interest.
Received: October 27, 2020.
Approved: December 20, 2020.