Cryptic shock is a poorly identified clinical entity, and it still describes a patient with signs of tissue hypoperfusion without affecting blood pressure. In the emergency department, it is important to identify signs of hypoperfusion and evaluate various hidden sources of infection by taking a complete medical history, a thorough physical examination, and, if necessary advanced imaging. It is necessary to conclude that the importance of the timely diagnosis of this clinical entity helps to improve the prognosis significantly.

Shock is a pathophysiological entity consisting of tissue hypoperfusion, and it is frequent in emergency services (1). Traditionally four types of shock have been described: hypovolemic, obstructive, cardiogenic, and distributive; the reported incidence of the latter is 66%, around 64% corresponding to septic shock (2). Shock is considered life-threatening if it is not diagnosed and managed promptly, mortality ranges between 40-60% and septic shock in 40%. When it is associated with organ dysfunction, lethality is significantly higher (3).

Many of the patients admitted to the emergency services present hypoperfusion and can remain undetected. Often many of these patients require alterations in blood pressure levels to be identified with hemodynamic compromise (6).

We present the case of a patient with cryptic shock according to recent definitions with no evident infectious focus on admission to the emergency service.

73-year-old male patient, independent baseline status, with a history of arterial hypertension, 3 days before admission, was evaluated in the emergency service for presenting a level fall (not witnessed by family members), causing contusion to frontal level, left periorbicular; discharged with symptomatic medication.

He was admitted to the shock trauma unit due to a disorder of consciousness and an episode of vomiting of food content. The evaluation found the patient in poor general condition, blood pressure 120 / 80mmHg, heart rate 109, respiratory rate 24, oxygen saturation 91% with Venturi mask at FiO2 0.4. He was found soporous, with the Glasgow Coma Scale (Ocular opening 1 Verbal response 2 Motor response 5) 8/15, with mobilization of the 4 extremities, evidence of periorbicular ecchymosis and edema of the left eyelid, wound faced with purulent discharge at the level of left eyelid, erythema on upper lip; rhythmic heart sounds of regular intensity; Audible vesicular murmur in both lung fields and bilateral snoring. Capillary filling of approximately 4 seconds, predominantly marbled skin on the lower extremities. The arterial blood gas showed mild acidemia due to respiratory acidosis and partially corrected hypoxemia and elevated lactate; samples were sent to the laboratory for serum tests (Table N°1). The diagnoses of hypoxemic-hypercapnic respiratory failure were raised, probably attributed to a pneumonic process, a sensory disorder to rule out intracerebral hemorrhage due to head trauma. A peripheral line and a drip saline infusion were placed, and intubation was carried out using fentanyl, midazolam and was connected to mechanical ventilation with protective parameters. He was transferred to the imaging room. A brain and thoracic tomography without contrast was performed, which did not show ischemic or acute cerebral hemorrhagic lesions, the lung parenchyma without infiltrates, or pleural effusion (Figure N°1).

Figure 1: A) Non-contrast chest tomography showing no significant focal lesions of the lung parenchyma, neither pleural effusion nor pericardium.
B) Brain tomography without contrast, there is no evidence of ischemia or acute hemorrhage. aguda.


Despite not receiving sedative drugs, he persisted with impaired consciousness. In addition, a fever peak of 38.5 ° C was evidenced. Laboratory tests showed leukocytosis and neutrophilia (Table N°1) and he was carefully reassessed to locate the probable focus of infection. Physical examination revealed no changes concerning admission, and no meningeal signs were found. As the infectious focus was not objective, the radiologist was consulted to evaluate the tomographic images in detail, which in the three-dimensional reconstruction showed a fracture of the lateral wall of the left orbit and maxillary sinus on the same side accompanied by haemosen, associated with changes suggestive of an inflammatory process of the adjacent tissue (Figure N°2). Based on the findings, it was decided to perform lumbar puncture and start of corticosteroids and broad spectrum antibiotic coverage (ceftriaxone + vancomycin + ampicillin), cloudy cerebrospinal fluid (CSF) was obtained with an opening pressure of 35 cm H2O, samples were sent for cultures and cytochemicals. 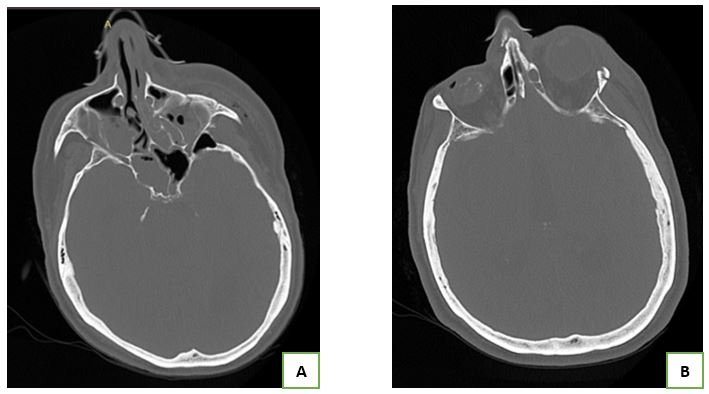 Figure 2: A) Tomography brain - bone window showing fracture of the left maxillary sinus, accompanied by haemosen and thickening of the TCSC and solid.
B) Left orbit lateral wall fracture. aguda.

The diagnoses of septic shock due to meningoencephalitis secondary to maxillary sinus-orbit fracture were reconsidered. Fluid therapy was optimized, and vasoactive titration was continued until stabilization. He was transferred to the neurocritical unit to continue treatment and monitoring. Three days the positive culture for Streptococcus Pneumoniae was confirmed; At the moment, the patient continues in the hospitalization area, finishing treatment for in-hospital pneumonia, stable without the need for supplemental oxygen.

However, the identification of patients with hemodynamic compromise in the emergency rooms is frequently discriminated by the existence of an alteration in blood pressure; it is evident that many patients present with signs of tissue hypoperfusion on physical examination, significant elevations of lactate and normal blood pressure levels; therefore, it makes early identification and timely management difficult, with mortality being higher in this group of patients (3). The emergency physician must be judicious when assessing the compromise of the airways and the existence of signs of tissue hypoperfusion and establish appropriate management in the first hours until hemodynamic stabilization is guaranteed and proceed in a more exhaustive manner to search for the cause of shock (1). Currently within the systematized evaluation of the patient with shock, rapid diagnostic methods have been introduced at the bedside, ultrasound is a useful tool used by emergency physicians for the non-invasive evaluation and classification of the hemodynamic profile of the patient with shock, the same; allows to reduce the differential diagnosis and increase the diagnostic precision for timely management (7) (8). Not all centers have this tool, in the case reviewed it was not possible to perform an ultrasound evaluation, in addition to the presence of normal blood pressure values and underestimating the signs of tissue hypoperfusion, an adequate diagnostic and therapeutic approach was not directed. Distributive shock is one of the most frequent types of shock reported (2), the most frequently described infectious foci are respiratory 42.1%, gastrointestinal 31.4%, genitourinary 6.1%. No infectious focus is found in the initial evaluation in 11% of In patients, a minor proportion 1.5% is attributed to infections of the central nervous system (9). It is important to evaluate hidden sources of infection by taking a complete medical history, a thorough physical examination, and, if necessary advanced imaging (1). In the case presented, the history of recent head trauma led to the suspicion of probable involvement of the central nervous system, despite the absence of meningeal-parenchymal involvement in the physical examination, on the other hand, only the classic triad of fever - neck stiffness - altered mental status in 41 - 51% of cases, so the absence of these findings cannot be used to rule out the possibility of bacterial meningitis (10); It was reported that the incidence of post-ECT meningitis varies from 0.2% - 17.8% and increases significantly in the presence of skull base fracture, pneumocephalus, loss of cerebrospinal fluid (11), with high mortality of 29 - 57.9% (12).

Currently, some reviews try to introduce a new classification system for septic shock according to vasoactive agents and serum lactate, however, the evidence is not sufficient (5). No differences in mortality were found in the septic shock profiles described "classic septic shock" - "cryptic shock" (5), however; patients with lactate levels of 2.5 - 4 mmol / L have an increased risk of death of 2.2, and those with lactate ≥4 mmol / L have a risk of 7.1 times higher (6).

The challenge for the emergency physician is to identify early patients who present with signs of tissue hypoperfusion, without alteration of blood pressure values. A medical history directed to the search for antecedents or triggers, a focused clinical examination and the aid of tools such as ultrasound are essential in the evaluation of the patient with shock. The importance of timely diagnosis and avoiding hemodynamic deterioration where the alteration of blood pressure levels is evident significantly improves the prognosis. Cryptic shock as a recently described clinical entity will allow early identification of patients with shock without significant hemodynamic compromise and thus establish early management and reduce patient morbidity and mortality.

Authorship contributions: RAG participated in the conception, design of the article, writing and approval of the final report. In addition, SST, SMS and AOO have participated in the collection of data from the clinical history and approval of the final report.
Financing: The research was self-financed.
Conflicts of Interest: The authors declare no conflict of interest.
Received: May 13, 2021
Approved: July 11, 2021