Introduction: Endometriosis is a chronic gynecological disease, which refers to the presence of endometrial glands and stroma outside the uterine endometrium. This entity has a frequency of 10 to 15% in women of reproductive age, and its most common site of presentation is the ovary. At the extrapelvic level, the most common location is the gastrointestinal and genitourinary location. However, it can occur in any location. Presentation: The case of a 40-year-old female patient with a face tumor in the jaw region is described, presenting with a disease time of 2 years. Among the important antecedents, two months before the appearance of the tumor region, the patient underwent endodontic surgery of a lower molar tooth, contiguous to the jaw. Likewise, one month before the appearance of the tumor, the patient underwent an exploratory laparoscopy for electrofulguration of endometriotic foci in the uterine myometrium. The patient underwent a surgical resection of the tumor in the jaw region described; and after reviewing the histological and immunohistochemical slides at the institution, the diagnosis of endometriosis was established. Conclusion: Extrapelvic endometriosis is rare in our country, and its diagnosis requires experience and visual training in the recognition of normal endometrial tissue. The presentation of this case was considered important because it would be the first case reported in Peru and in the world, of an endometriosis located in the jaw region.

Endometriosis is a chronic gynecological disease, defined as the presence of normal endometrial tissue, abnormally located in locations other than the uterine endometrium. It is a relatively common entity, whose frequency ranges from 10 to 15% of women at reproductive age, with a peak incidence between 30 and 45 years. Clinically it can manifest with dyspareunia, dysmenorrhea and infertility, although it can also be asymptomatic (1,2,3,4).

In general terms, endometriosis can be divided into pelvic and extrapelvic(3,5). Regarding pelvic location, the most common location is the ovary in 67%. Other locations that follow in frequency are the fallopian tube, Douglas pouch and pelvic peritoneum(1,2).

Approximately two years ago, the patient noticed in the right jaw region, a small tumor, approximately 0.5 cm on clinical palpation, indurated, which grew progressively until it measured approximately 3 cm. The patient presented intermittent pain in this tumor and the pain intensified mainly with acupressure. The patient also reported more intense symptoms during her menstrual period.

Due to the size and growth of the tumor, the head and neck surgeon decided to perform surgery for its surgical resection, raising as a diagnostic presumption a facial fibroma. Subsequently, the surgical specimen was sent to the anatomic pathology service.

The patient did not undergo any imaging study, since the head and neck surgeon chose to perform the surgery as soon as possible. No serum dosage of any tumor marker was performed either.

On macroscopic evaluation of the surgical specimen, a fragment of tissue with an irregular surface measuring 3x 2.5 x 2.5 x 1.8 cm, light brown in color and firm in consistency was observed. Multiple cuts revealed heterogeneous tissue of whitish brown color alternating with yellowish areas and other areas of dark brown color.

Microscopy showed fibroadipose tissue with presence of glandular structures covered by pseudostratified cylindrical epithelium, some of them dilated and with presence of hemosiderophages in the lumen, surrounded by cellular stroma. With the aforementioned histological findings, Endometriosis was proposed as a probable diagnosis.

Due to the atypical location and for diagnostic support, immunohistochemical studies for Estrogen and Progesterone Receptor (ER/PR) were requested, confirming the suspicion, both immunohistochemical markers were positive for stromal cells and cells of the glandular epithelium, concluding with certainty the diagnosis of Endometriosis. 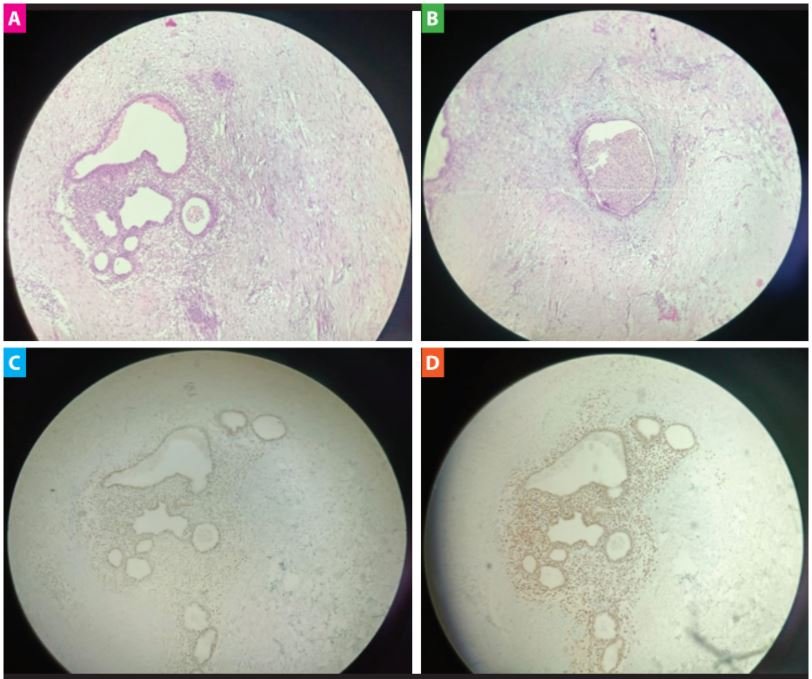 
Subsequently, the patient was reevaluated one week after surgery, and reported great clinical improvement. Therefore, it was decided not to prescribe any additional treatment. She did not require any hormonal therapy either.
The patient was clinically stable with no symptoms at 6 months of reevaluation, currently she no longer presents episodes of dysmenorrhea, nor evidence of other tumors in the jaw region.

Endometriosis is an estrogen-dependent entity, and is considered to be the most common cause of chronic pelvic pain in women of childbearing age. Because of its estrogen-dependence, it is extremely rare after menopause(3). The patient in the present case is 40 years old, which is in accordance with the most frequent age of presentation of this pathology.

Extrapelvic endometriosis is usually a rare condition and is generally associated with delays in diagnosis and significant morbidity(5).

Within the extrapelvic locations we find the following, summarized in the table below(6):


Endometriosis has a multifactorial etiology. Traditionally, there are three theories that attempt to explain the origin of endometriosis, which are summarized in the following table (3,4):

Table 1. Theories about the etiology of endometriosis


In general terms, the most widely accepted theory for the pathogenesis of endometriosis is the theory of ectopic endometrial implantation through retrograde menstruation. Likewise, extrapelvic endometriosis, as in the case of the patient in the present clinical picture, can be explained by migration of endometrial cells through lymphatic and blood vessels (3,4).

In this particular case, two important antecedents were found: an electrofulguration surgery of endometriotic foci, and an odontological surgical procedure in a dental piece, close to the area of appearance of the tumor. The odontological procedure stands out mainly because this procedure could have contributed considerably, according to the dispersion theory, to the migration of endometrial cells by hematogenous route to the jaw region.

There are also certain factors that are still under investigation today, and which also seem to be involved in the origin of endometriosis, which are presented below:

In relation to the histopathological diagnosis of both pelvic and extrapelvic endometriosis, there are the following criteria, and at least 2 of them must be met to establish a definitive diagnosis (2).


Endometriosis can be diagnosed with well-defined histopathological criteria, as presented in Tabla 2(2). In this case report, all these criteria were evidenced, so the final diagnosis of endometriosis was made, in this case, of jaw location.

The immunohistochemical study can be of help in doubtful cases, since the glandular structures express cytokeratin 7 (CK7), estrogen and progesterone receptors (ER/PR), the same immunomarkers that are expressed in normal endometrium(7).

Also, in the case of suspected stromal endometriosis, or in the situation where we wish to verify that the stroma we are looking at microscopically corresponds to endometrial stroma, we can use immunohistochemistry for CD10, as well as estrogen receptor (ER), both of which can be useful for marking stromal cells. However, it is important to keep in mind that CD10 is a rather nonspecific marker and that other stromal cells in the female genital tract may also be ER positive (1).

Clinically, both pelvic and extrapelvic endometriosis can be confused with any proliferative tumor, benign or malignant. The key to suspecting the diagnosis of endometriosis is to inquire about the patient's clinical history, looking for related symptoms such as dysmenorrhea, dyspareunia and infertility(5). In the patient's case, we found dysmenorrhea to be an important symptom.

Taking into account the nature of endometriotic disease and the associated chronic pain, treatment is often a challenge. Endometriosis, being multifactorial and having no defined cause, has a basically empirical treatment(8).

Regarding medical treatment, contraceptive pills can be used, since they cause a reduction in the amount of bleeding and thus allow for the reduction of pain during the menstrual period(3).

In addition, gonadotropin-releasing hormone (GnRH) agonists may also be used because they block the production of ovarian stimulating hormones, which reduces estrogen levels, and consequently causes endometrial tissue to shrink. GnRH agonists can force endometriosis into remission during the time of treatment and sometimes for months or years afterwards(3).

However, medical alternatives that include hormonal suppression have proven to be of limited effectiveness. For this reason, the ideal drug does not yet exist(8).

For this reason, medical treatment is usually associated with conservative or non-conservative surgical treatment, depending on the patient's desire to preserve or not her reproductive capacity.

Conservative surgical treatment can include electrofulguration, laser evaporation and thermal coagulation, and can be performed laparoscopically or laparotomy (open surgery)(3). Regardless of the surgical technique used, it is important that all endometriotic lesions are adequately removed and all adhesions are carefully cleaned in order to significantly reduce pelvic pain and the risk of infertility in women who wish to preserve their reproductive capacity(3).

Non-conservative surgical treatment includes the performance of a total hysterectomy, specifically for those women who already have their parity satisfied(8).

In relation to treatment, it is relevant to mention that the patient did not receive hormonal treatment with contraceptives or GnRh analogs at any time, since after the surgery for electrofulguration of endometriotic foci, the episodes of dysmenorrhea decreased considerably.

Likewise, after surgical resection of the tumor in the jaw region, the patient presented significant clinical improvement; therefore, it was decided not to prescribe any complementary treatment.

Extrapelvic endometriosis is infrequent in our country, and the thought of such diagnosis requires experience and visual training in the recognition of normal endometrial tissue.

This case report is intended to motivate all anatomopathologists to consider the diagnosis of endometriosis whenever we are faced with a patient of reproductive age with a tumor in any location of the body.

Likewise, it is always recommended to make an adequate clinical-pathological correlation in order to establish a properly supported diagnosis, so that a treatment directed to the patient can be offered afterwards.

Authorship contributions: The authors were involved in the genesis of the idea and design of the project, collected and interpreted the data, analyzed the results and developed the manuscript of this case report.
Funding sources: Self-funded.
Conflicts of Interest: The authors declare that there is no conflict of interest regarding the publication of this work.
Received: July,7 2021
Approved: August 9, 2021