Testosterone is the androgen derived from cholesterol with the highest presence in men, 95% of the total circulating testosterone (6 to 7 mg/day). It is produced by Leydig cells in the testes (1,2).

The main effects of testosterone are two: androgenic and anabolic. The androgenic effects are related to male sexual characteristics. The anabolic effects are responsible for the formation of proteins, mainly the increase in muscle mass (3).

A group of chemically similar steroid hormones is anabolic-androgenic steroids (AAS) (4), which were created to minimize androgenic effects and maximize anabolic ones by promoting skeletal muscle growth (5).

Among the therapeutic uses of AAS we have the restoration of muscle mass in the treatment of cachexia associated with severe burns, kidney failure, and AIDS. They are also used as hormonal substitutes in men with hypogonadism or low levels of circulating testosterone (3,6). However, self-administration to improve their physical conditions is frequent in young male athletes and bodybuilders who want to improve their physical appearance by increasing their muscle mass (7).

Currently, studies show that the use of AAS is frequent, and four out of five people are not athletes and use them only for cosmetic purposes (8). Thus there is also evidence that its use to improve performance and acquire more muscle is increasing Worldwide. Only in the USA at least two million people use or have used AAS (9), on the other hand, the prevalence in countries such as Norway, Argentina, and Poland were 3.6%, 6.5%, and 6.2%, respectively (10-12), is older.

When the AAS are administered under medical prescription, they do not present risks, but in athletes who abuse androgens, these serious side effects have been reported since 1988 (13). Among those most at risk is myocardial infarction, especially in weightlifters (14). A stroke left ventricular hypertrophy and sudden cardiac death are also found. Bile duct obstruction and an increased risk of tumors have been reported (3). All of these cases support the idea that exogenous androgens may be thrombogenic (15).

Electrocardiographic studies show that very high doses of AAS modify the physiological functioning of the cardiovascular system, which is why it is necessary to investigate the relationship between endogenous testosterone concentration and its possible effects on the origin of cardiovascular thrombosis (16). Testosterone therapy has also been associated with increased expression of the thromboxane A2 receptor on platelets, in addition to increased platelet aggregation, potentially creating an increased risk of thrombus formation (15).

The objective of this work was to determine the effect of the testosterone metabolite on platelet quantification in ORX rats with or without DHT replacement.

Animals
This study was carried out in male Wistar rats weighing 200 to 300 g obtained from the Animal Facility - Universidad Católica de Santa María. The experimental procedures and protocols were approved by the Ethics Committee of the Catholic University of Santa María and are in accordance with the IASP manual for the study of pain in animals (17). The animals were housed in the Bioterium, in metal cages (five rats/cage) in a room with controlled room temperature (23 ± 1 ° C) in a 12:12 light-dark light cycle, with food and water available ad libitum.

Orchidectomy (ORX)
45-day-old male Wistar rats underwent orchidectomy with a simple scrotal incision. The procedure was performed under anesthesia induced by an intramuscular injection of ketamine (55 mg/kg) and xylazine (5.5 mg/kg) mixture. Subcutaneous injection of ketoprofen (5 mg/kg) was used for postoperative analgesia (18). Orchidectomy rats (ORX) were subjected to experimentation 4 weeks after surgery. The sham rats operated underwent a surgical procedure similar to that of the ORX rats, except that the gonads were not removed. (19,20)

Hormone administration
At 2 and a half months of age, the 24 rats were divided into 4 groups of study (6 rats in each group). The group with 12 male ORX rats, consisted of 6 animals that received hormone replacement with dihydrotestosterone propionate (DHT) at a dose of 2 mg/kg through a subcutaneous injection for 7 days and, and 6 animals that received physiological solution (0.9% NaCl) (21). Another parallel group with 12 non-ORX males was called rats SHAM (simulated), 6 of which received daily subcutaneous administration of DHT propionate at a dose of 2 mg/kg and the other half physiological serum (0.9% NaCl) for 7 days. The systemic administration of DHT, in ORX rats, was performed as a replacement to match physiological levels compatible with that observed in shams (21). To determine if DHT induces an increase in platelet count, ORX or sham DHT (2mg/kg) and ORX rats or sham NaCl (0.9%) were administered. 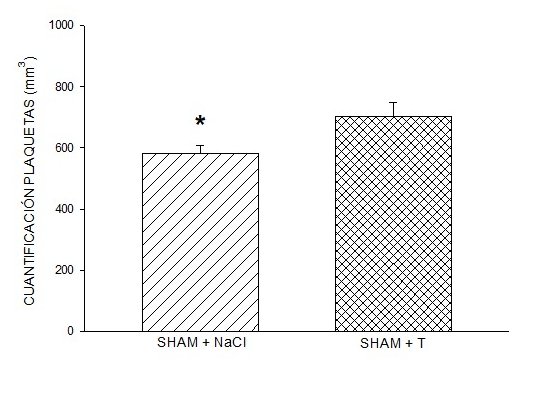 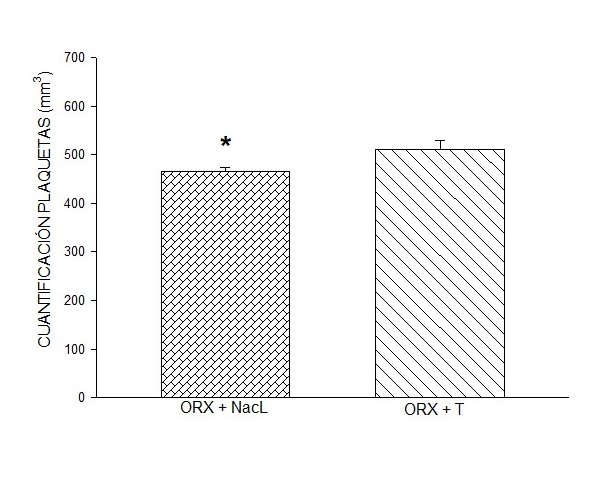 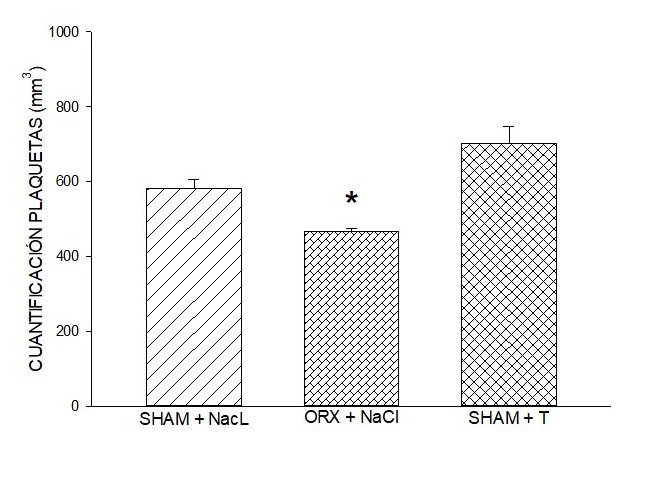 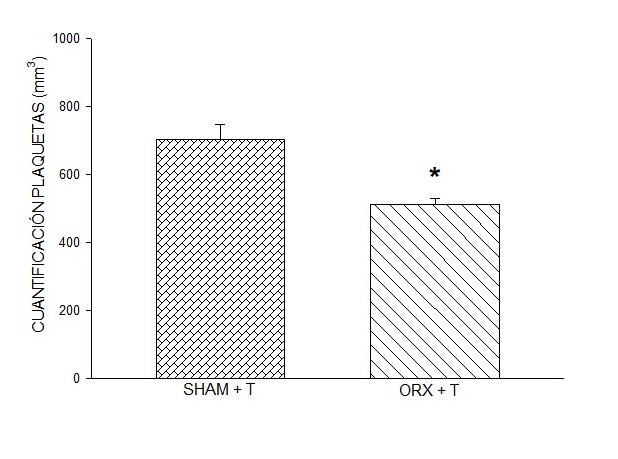 DHT administration in male ORX rats induced a quantification response similar to that induced by 0.9% NaCl (saline). However, the quantification response induced by the administration of DHT in sham males was significantly greater than that induced by 0.9% NaCl (Figure 1), one-way ANOVA, p < 0.005, and test to compare two groups (p < 0.04). The quantification response found similar endogenous testosterone results in ORX males and males sham with 0.9% NaCl, which showed that the DHT dose was physiological concentration (failed T-test, p < 0.05). The statistical difference between endogenous DHT administration between rats sham and ORX male rats (Dunn method, p < 0.05) suggests that the impact of the prolonged reduction in physiological testosterone concentration, through ORX, on platelet expression TXA2 affects upregulation of platelets, suggesting controlled endogenous testosterone concentration. 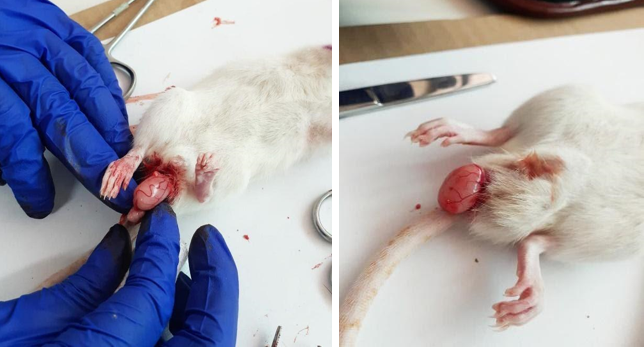 Figure 5: Orchidectomization of male rats.
A simple scrotal incision was made under anesthesia, the testicle was identified, the spermatic cord was tied, and the cut was made to avoid bleeding. The same was done in the other gonad (19) 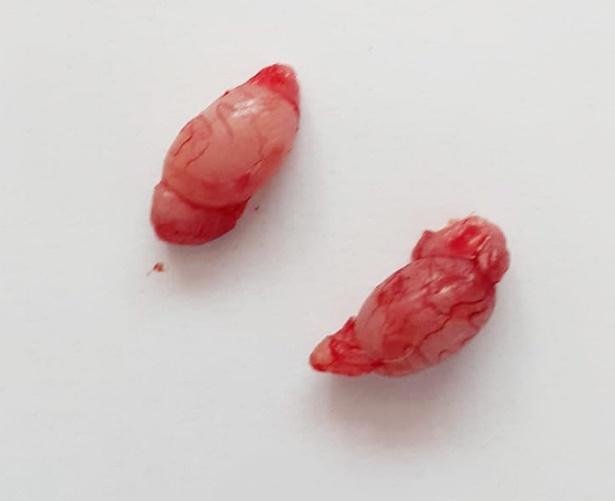 Figure 6: Excised testicles. Both gonads are excised, with remains of the epididymis.

This study shows a significant difference between the DHT replacement group and the other comparison groups. Blood platelet levels decrease in situations such as ORX induced by endogenous testosterone decrease, in addition, the blood platelet level decreases in young ORX rats that received physiological saline when compared to the group of rats that received exogenous DHT. A double-blind study by Ajayi coincides with a significant increase in platelet aggregation, with anabolic androgenic steroids contributing to a thrombotic state (22).

Karolczack et al., Showed that the effect of sex steroids in vitro, where testosterone is stimulated by collagen or arachidonate, has the power to inhibit platelet aggregation in people in the 60-65 age group, including men and women (23), a study that evaluates the modulation of TXA2, through the administration of testosterone, showed that the level of TXA2 protein synthase increases in cerebral blood vessels (24); however, more studies are required to rule out that there is another indirect effect causing this action. In comparison with the study by Campelo et al., it was obtained as a result that testosterone inhibits platelet aggregation, indicating that it is a nitric oxide-dependent effect. Endothelial (25). In summary, this study suggests that the administration of steroid anabolic androgenic did not affect platelet regulation because, after castration, the circulating testosterone concentration is associated with a significant decrease in platelet receptor density TXA2 (26).

In another experiment, it was seen that the supraphysiological administration of testosterone inhibits fibrinolytic activity and the bleeding time is significantly prolonged; however, the platelet aggregation induced by ADP was unchanged (27). Studies currently suggest that the consumption of anabolic androgenic steroids is associated with thromboembolism and increases its thrombotic risk since they inhibit the production of a platelet aggregation inhibitor prostacyclin, generating hypercoagulable states (28), also presenting cardiomyopathies, hypertrophy cardiac among others (29).

Some studies conclude that there are more harmful events in men who had hormone replacement therapy or consumption of anabolic androgenic steroids (30-33); however, there are others where they found neutral and even beneficial effects (34,35).

Given the diversity of results, this due to different factors such as the androgen prototype used, the number of doses, the time of treatment, the form of administration and the type of laboratory tests that exist for its evaluation, is that the FDA warns of the consequences of using this type of substance without medical consultation or indication, approving only its use in cases of hormone replacement treatments (36). The misuse of anabolic androgenic steroids can lead to dependence in a physical and psychological context. (37)

Various studies indicate a higher prevalence of anabolic-androgenic steroids in young people aged 15-24 years by 54% (11). The population that consumes these androgens mustn’t abuse the concentrations, given that long-term adverse effects may occur. Our research suggests expanding and continuing with studies to elucidate the empirical relationship between the use of these anabolic androgenic steroids and the consequences on the body of this abuse, as the number of people who use these substances continues to increase.

This study shows that DHT increases platelets in Wistar rats when testosterone is administered at supraphysiological levels, suggesting a probable TXA2 pathway. Subsequent studies hope to elucidate this likely mechanism, using TXA2 inhibitors to better clarify through up-regulation of platelets.

Recognition: Special recognition is given to the personnel who work in the Animal Farm, for their great support in this project, and to UCSM for promoting research in its students.
Authorship contributions: The authors participated in the conception of the study, collection, analysis and discussion of the data. participated in the preparation of the manuscript, bibliographic search and approval of the final version of the manuscript.
Financing: This project was carried out with a fund won in a Research Projects contest at UCSM, Arequipa-Peru.
Conflicts of Interest: None declared by the authors.
Received: July 19, 2021
Approved: September 02, 2021