INTRODUCTION
Cervical cancer is defined as the malignancy that affects cells that line the cervix. Cervical dysplasia is the precursor lesion of cervical cancer, in which alterations of the cervical cells are observed without adopting malignant characteristics1.
According to the World Health Organization (WHO), it is the fourth most frequent cancer in women. It is estimated that in 2018 there were 570,000 new cases, which represented 7.5% of female mortality from cancer. Of the approximately 311,000 deaths per cervical cancer recorded each year, more than 85% occur in less developed regions2.
According to GLOBOCAN, in 2018 the most significant world incidents occur in the regions of South Africa and South America, with rates higher than 26.0 and 18.1 respectively, for every 100,000 inhabitants. However, the USA, Canada, and Australia have the lowest incidences, with rates below 7.3. Latin American countries with incidence rate higher than 30 x 100 000 women are Guyana (44.7), Nicaragua (39.9), Honduras (37.8), El Salvador (37.2), Bolivia (36.4), Paraguay (35.0), Peru (34.5), Venezuela (31.4) and Guatemala (30.5). In the GLOBOCAN report of 2018, the Latin American country with the highest incidence of this disease in Bolivia, with a rate of 38.53.
In Peru, a woman dies of cervical cancer every 5 hours3. According to the oncological profile of the countries published by the WHO in 2014, in Peru, cervical cancer is the most frequent cancer, and, in turn, this cancer is second cancer with the highest mortality in the female population (12.3 per 100 000 inhabitants)4. L The regions with the highest adjusted mortality rates for cervical cancer are Loreto (18.0), Huánuco (12.8), Ucayali (10.3), with values that double and even quadruple that of Lima (4.2)5.
In 2015, 6627 patients were treated by the Oncology Gynecology department at the María Auxiliadora Hospital, of which 59% (3965) cervical cytology screening studies were performed, with the diagnosis of cervical dysplasia at 44.98%. Women (2981) which indicates the importance of the education of this precancerous lesion to prevent its progression to cervical, uterine cancer6.
The cervix consists of 2 parts: the ectocervix, which is covered by a stratified squamous epithelium and the endocervix covered by a single cylindrical epithelium layer. The squamous metaplasia of the cervix consists in the physiological replacement of the cylindrical epithelium everted to the ectocervix by a neoformed squamous epithelium. The metaplastic epithelium can evolve in two ways. In the vast majority of women, it becomes mature squamous metaplastic epithelium; however, in the minority, it can develop to the atypical dysplastic epithelium. The invasive cervical cancer of squamous cells is preceded by a long phase of preinvasive diseases, called cervical intraepithelial neoplasia (CIN). The CINs are classified in grades 1, 2 and 3 according to the proportion of the epithelial thickness that presents mature and differentiated cells. Most cervical abnormalities are unlikely to progress to CIN or high-grade cervical cancer. The lowest-grade NIC returns to normal in relatively short periods or does not advance to a high degree. It is much more likely that high-grade CIN will become invasive cancer. The precursor lesion originated in the cylindrical epithelium is called adenocarcinoma in situ (AIS). AIS can be associated with CIN between one and two-thirds of cases30.
Human papillomavirus (HPV) is a necessary, but not sufficient, cause to develop cervical cancer7,8. HPV types 16 and 18 are responsible for 70% of cervical cancers9. Because only a small proportion of HPV infections progress to cancer, other cofactors, external and proper to the host, must be involved in the carcinogenesis process.
For this reason, the present study was conducted to identify the predisposing factors for cervical dysplasia in the patients treated at the María Auxiliadora Hospital from 2013 to 2017. 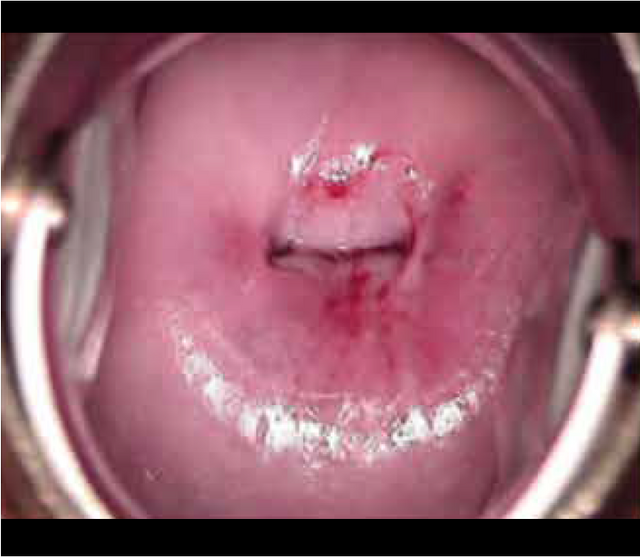 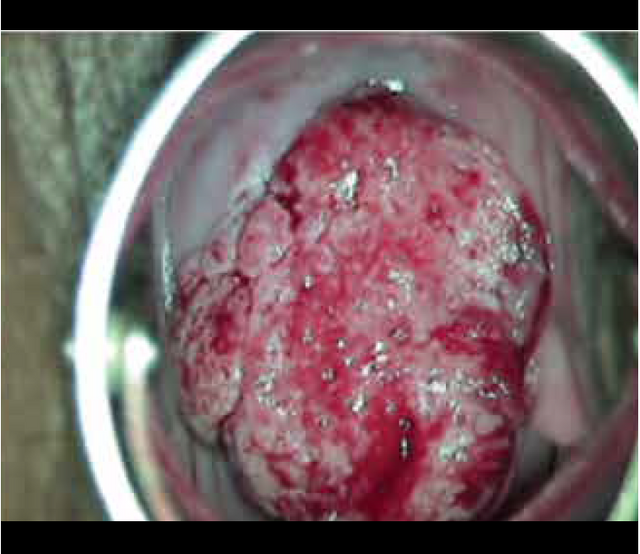 METHODS
Case study and controls of observational, retrospective and analytical research. The population consisted of all the patients who had a cervical cytology study, with or without a diagnosis of cervical dysplasia in the Oncology Gynecology Service of the María Auxiliadora Hospital during the period 2013 to 2017. According to the study conducted by Ruiz et al., taken as reference the 20% prevalence of altered cervical cytology in the controls. Therefore, it was estimated that the prevalence in the cases was 38%. The possibility of obtaining an OR of 2.5, with a confidence interval of 95% and a statistical power of 80%, was considered, matching the study units in 2 controls for each case.
The sample consisted of 216 patients: 72 cases where patients with a diagnosis of cervical dysplasia were found; and 144 controls, who do not present a diagnosis of cervical dysplasia.
Inclusion criteria were female patients with altered cervical cytology, with or without a diagnosis of cervical dysplasia and clinical histories with complete data to be studied. The exclusion criteria were incomplete and/or illegible clinical histories, pregnant patients, patients diagnosed with invasive carcinoma (cervix) or other neoplasms. The variables studied were: cervical dysplasia, sociodemographic characteristics, and gynecological-obstetric characteristics.
Data collection was carried out using data from medical records provided by the Statistical and Information Office of the María Auxiliadora Hospital. Data analysis was performed from the database constructed in the statistical program SPSS version 25. All comparisons were made with a confidence interval of 95% and a degree of error of 0.05% (p < 0.05).
Likewise, the study was approved by the support office for teaching and research of the María Auxiliadora Hospital.

RESULTS
In Table 1, it was observed that, according to the sociodemographic characteristics, the degree of predominant instruction was secondary (70.8%), being the only statistically characteristic significant (p = 0.016).
Likewise, table 2 indicates that the majority of the cases (70.8%) presented multiple sexual partners, greater than two pregnancies (76.4%) and greater than two deliveries (68.1%).
In table 3, it describes the bivariate analysis of the characteristics studied. Early menarche increases the risk of presenting cervical dysplasia by 2.07 times (p = 0.024), and the early onset of sexual life increases the probability of introducing this disease in 2.21 times (p = 0.017). Similarly, having 3 or more sexual partners increases up to 3.03 times (p = 0.001) the risk of suffering from this pathology. On the other hand, presenting more than 2 pregnancies would increase the risk of dysplasia by 1.77 times; however, it is not statistically significant (p = 0.078). Having 3 or more births raises the possibility of this disease up to 2.31 times (p = 0.005). Finally, regarding the use of contraceptive methods, it would be treated as a protective factor, but this finding is not statistically significant (OR = 0.673, p = 0.173).
Likewise, in table 4, it was identified that having multiple sexual partners (OR = 2,626, P = 0.003) and having more than 2 births (OR = 2,759, P = 0.045) are statistically significant for the development of cervical dysplasia.
It should be mentioned that the presence of HIV infection was not considered as a predisposing factor in the present study; however, it was found that the 10.6% (n = 23) of the patients had an infection by this virus, of which 14 belonged to the cases, and the remaining 9 were controls. 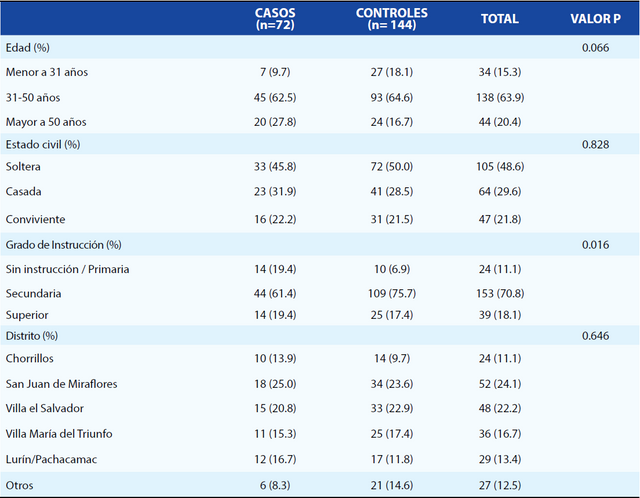 Out of all women, the most common PAP findings were: Squamous metaplasia and Squamous cells atypical of indeterminate meaning (ASCUS). (Graph 2) 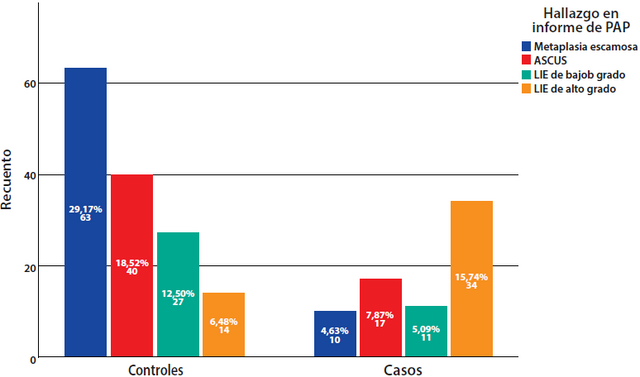 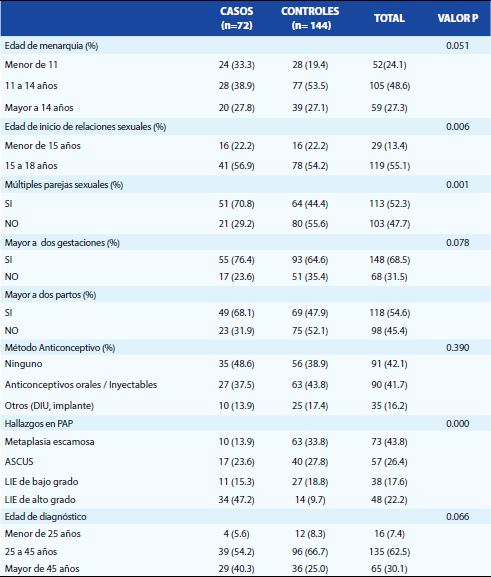 Table 3. Bivariate analysis of the predisposing factors for cervical dysplasia in patients with abnormal cervical cytology treated at the María Auxiliadora Hospital. 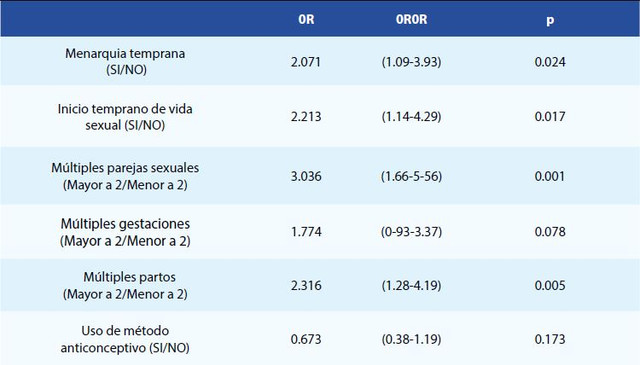 Table 4. Multivariate analysis of the predisposing factors for cervical dysplasia in patients with abnormal cervical cytology treated at the María Auxiliadora Hospital. 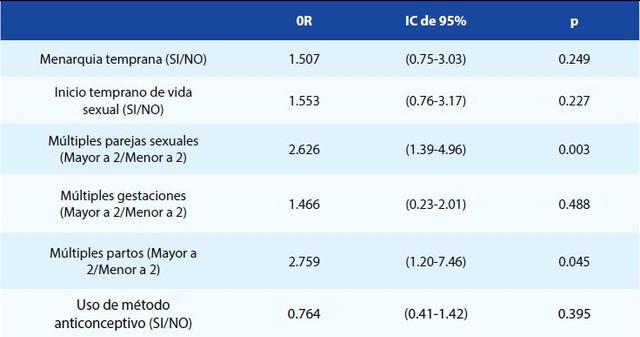 
LIMITATIONS OF THE STUDY
The study is unicentric. Likewise, the number of cases is 72 which is compensated with the 144 controls. This type of research only allows us to detect possible associations, and generate future hypotheses of relationship causes effect, in comparison with multicentric, longitudinal and prospective studies.

CONCLUSION
In the present study it is concluded that the lifestyle factors predisposing to cervical dysplasia were having multiple sexual partners and multiparity.

Authorship contributions: The authors participated in the conception, a collection of information, writing, and approval of the final version of the article.