MATERNAL FACTORS ASSOCIATED WITH FETAL MACROSOMIA IN A PUBLIC HOSPITAL OF LIMA- PERU, JANUARY TO OCTOBER 2018

ABSTRACT
Introduction: Macrosomia involves both maternal and fetal appearance with modifiable factors from the multidisciplinary point of view. Objetive: To determine the maternal factors associated with fetal macrosomia in the gynecology and obstetrics department of the Sergio Bernales Hospital, from January to October 2018. Methods: Retrospective, analytical case-control study. A data collection form was used, and the data was obtained from the medical records. Results: Of 401 newborns, 27.2% of the mothers underwent a bivariate and multivariate analysis, using the SPSS v25.0 program. Of the 401 newborns, 27.2% of the mothers in the study had an inadequate weight gain, 89.5% of the pregnant women were in the age range less than or equal to 35 years old, and 10.2% of the sample had a history of macrosomic products. A statistically significant relationship was found between fetal macrosomia and weight gain during pregnancy (OR: 5.49, 95% CI: [3.07-9.81]), pre-pregnancy weight (OR: 9.4, 95% CI: [5.28-16.72]), maternal age (OR: 2.28, 95% CI: [1.24-4.18]) and parity (OR: 2.33, 95% CI: [1.009-5.38]). Conclusion: The prevalence of fetal macrosomia in the period from January to October 2018 was 6%. In the multivariate analysis, an association was found between fetal macrosomia and inadequate weight gain during pregnancy, pre-pregnancy weight, maternal age, and parity.
Key words: Fetal Macrosomia; Risk factor's; Parity; Gestational age. (source: MeSH NLM)

INTRODUCTION
La Macrosomia1 is defined as a development excessive according to the weight of the Newbornabove 4500 grams, and for others it is useful to use the percentile 90, however, in recent years the frequency of cases of macrosomia was increased in economically developed countries, 5.4% with weighing more than 4500 grams and from 10% to 13% with a weight greater than or equal to 4000 grams2.
In recent years, the incidence of macrosomia has considerably increased, reporting rates which range between 10% and 13% when used as a net value a birth weight greater than 4,000 grams3. Currently, besides weight at birth (PN) and gestational age (EG), proposes the weight index (IP) as a parameter that would define two macrosomic subtypes4.

At present, the prevalence of fetal macrosomia varies from 4.1 to 13.4% in different ethnic groups4,5. These and other studies report that the main factors associated with the increase in macrosomia are maternal diabetes, prolonged pregnancy, increased weight gain during pregnancy and increased BMI, among others6,7.
The World Health Organization (WHO), in a study conducted between 2006 and 2012, shows figures of 7.6% at the level of South America, of overweight newborns while, in Peru, the figures were 6,9%9,10. In Peru, studies conducted by Dr. Rendón11 show figures of fetal macrosomia in hospitals of the Ministry of Health of Peru of 11.37%, which highlights the variation of percentages according to the regions of our interior country, showing a higher prevalence in the Costa region with 14.34%, the Sierra with 7.12% and the jungle with 9.81%, which reinforces the association of the same, with the conditions of the social and economic environment of the population11.
The main objective of the present study was to determine the maternal factors associated with fetal macrosomia in the gynecology and obstetrics service of a Public Hospital of Lima - Peru from January to October 2018.

METHODS
An analytical, observational study was carried out, retrospective, case-control type, focus quantitative and inferential statistics, where collected information from the newly born of the gynecology and obstetrics service of Sergio Bernales Hospital during the January period to October 2018. The study population consisted of 3150 newborns, according to the selection criteria, information was collected from 401 newborns, with 99 cases and 302 controls, because they were excluded newborns macrosomic transferred from another hospital center, newborns of mothers with pregestational weight within the low weight category and mothers with a weight gain below what expected for the pre-pregnancy weight category. The information obtained from the clinical histories and new born registration books was collected in a datasheet, subsequently placed on a base of data and software was used for processing of data, the SPSS Statistics version 25 program.
For the statistical analysis of the data, it was calculated from odds Ratio with its confidence intervals 95% and a significance p (<0.05) through the test of Chi.-square.

RESULTS
Out of 3150 newborns, the prevalence was 5.65%had fetal macrosomia, both vaginal delivery, as by cesarean section, according to the selection criteria the sample was 401 newborns: 99 cases and 302 controls. Regarding the maternal factors associated with fetal macrosomia, weight gain was found during pregnancy; of our sample studied 251 (83.1%) was adequate, in terms of the category of pre-pregnancy weight, being predominant overweight or obesity, and parity, meeting prevalence in multiparous patients was 73 (73.7%), respectively. Also, the maternal age was younger than 35 years in 278 (92.1%). Finally, 291(96.4%) of the patients had no history of fetal macrosomia. Table 1.

DISCUSSION
The macrosomia is established as a diagnosis not only nationally, but also internationally, according to Cunha et al12, in our country the incidence was 5.3%in the year 2012, other studies conducted in hospitals of the interior of the country such as Quiroz F. Rolando13 in the Maria Auxiliadora Hospital in 2016, demonstrated an incidence of 9.83%, while in another study performed by Paico L. Daniel14 in the same hospital in the year 2017 it found an incidence of 9.1%; in the present study found an incidence of 6% of fetal macrosomia at the Sergio Bernales Hospital, which would indicate that the prevalence of macrosomia aforementioned hospital is close to national values and below the prevalence of other hospitals.
According to the study carried out by García, Ángel R.15, in the obstetrics service of the Felix hospital Mayorca Soto de Tarma in 2014, observed that the Macrosomic products were mostly mothers with obesity, however, the results were not statistically significant, a study performed by Herrera Risco16 at the Centro Materno César López Silva from the district of Villa El Salvador year 2011, where the body mass index(IMC) average was 23.6 ± 3.1 Kg/m2, found a Low but significant correlation between gain with 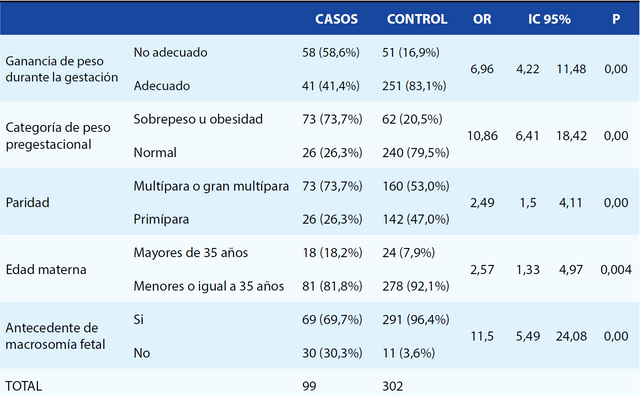 
In the multivariate analysis, it was found that the variables of maternal factors remained associated with the weight of the mother and the weight of the newborn, being statistically significant (p = 0.00, p = 004), table 2.

fetal macrosomia, same way in the study conducted at the Hospital Sergio Bernales year 2016 by Sotomayor B. Joanna17 a statistically significant relationship is described between the maternal weight gain and the weight of the newborn, however in the aforementioned study a small sample population was taken.
In the study conducted by Jiménez Puñales Sandi18 and collaborators maternal obesity predominates:85 (94.3%) (p = 0.003), as a risk factor fora macrosomic product, corroborating the findings in our study, this being a risk factor controllable that with a correct maternal orientation would decrease the rate of fetal macrosomia, avoiding thus expose the newborn to complications to what this problem entails. Also, a factor of risk for fetal macrosomia, is also the parity, since studies have shown that the higher number of pregnancies the probability of products Macrosomic increases19 up to 70%, in the present study 73.7% of mothers of products Macrosomic are multiparous or large multiparous, thus supporting the previous studies, since it was found statistical significance with respect to this variable. Maternal age is another risk factor for fetal macrosomia, some authors attribute this to the maternal metabolism relating it to the intrauterine growth of the fetus16; in the study carried out by Alejandro Estrada and collaborators15 showed that being 35 years old or older is a factor in risk for fetal macrosomia (OR = 1.1, 95% CI: 1.1-1.1), however in our study it was found that patients who had ages less than or equal to 35 years had a macrosomic product.
With respect to the history of fetal macrosomia, it is mentioned that the risk of fetal macrosomia increases in each pregnancy, in that way and having as limit the fifth pregnancy, refers than the average weight at birth in each pregnancy progressively increases approximately about 4 ounces which is equivalent to 113 g19, which it correlates with the results of this study, in wherein the bivariate analysis correlation was found between a history of fetal macrosomia and a new macrosomic product, being statistically significant (p = 0.00).

CONCLUSION
It is concluded that the variables of the maternal factors as inadequate weight gain during pregnancy, maternal pre-pregnancy weight, parity, and maternal age are associated with fetal macrosomia

Authorship contributions: The authors participated in the genesis of the idea, project design, collection and interpretation of data, analysis of results, preparation of the manuscript.