RESUMEN
Objetive: To determine the clinical-epidemiological indicators associated with pressure ulcers (PU) in patients of the Medical Service of the Hipólito Unanue National Hospital in 2016-2017.Methods: Observational, analytical and retrospective study, based on the review of medical records. A non-probabilistic sample was obtained for convenience, calculating the odds ratio (OR), applying the 95% confidence interval and using the chi-square test, with a p-value of <0.05 being statistically significant. Results: In the study, 93 patients fulfilled the study criteria. The male subjects formed 50.5% of the total population, the average age was 68 years old (+21 years), and 74.19% of the total population consisted of elderly adults. The most frequent locations of PU were at the sacral area (77%) and heel (12.9%); likewise, the most common stages were II (32.3%), IV (31.2%) and III (26.9%). The presence of severe PU was associated to old age (OR: 3.12, 95% CI: 1.2-8.2), hypoalbuminemia (OR: 6.23, 95% CI: 1.8-21.1), anemia (OR: 4.31, 95% CI: 1.2- 14.9) and lymphopenia (OR: 3.68, 95% CI: 1.5-9). Conclusion: Elderly patients with hypoalbuminemia, anemia or lymphopenia are at greater risk of developing severe pressure ulcers, which significantly decreases their quality of life.
Key words: Pressure ulcer; Hypoalbuminemia; Anemia; Lymphopenia. (source: MeSH NLM)

INTRODUCTION
Pressure ulcers (PU) currently represent a significant health problem in which not only patients and family members are affected, but also generates a high impact on the health systems. Nowadays, the incidence and prevalence of PU are in considerable quantities and are increasing throughout the world. The existence of a pressure ulcer is of an iatrogenic nature. Its appearance can be prevented with an appropriate organization in health centers, which could increase the quality of care in health facilities of all levels1.
A pressure ulcer is defined as an injury of ischemic origin and is located in the skin and deeper tissues. The loss of skin tissue is evident and happens at the time of continuous pressure or friction between two hard surfaces2. The hospital environment is considered one of the most significant places for the appearance of these lesions because there is no adequate mobilization of the patient, and a prolonged stay of the patient can coexist with the presence of a pressure ulcer. It can complicate and even prevent the treatment to be effective3.
Many of these injuries occur in public hospitals, especially in the Intensive Care Units and internal medicine services-geriatrics4. According to the National Pressure Ulcer Advisory Panel (NPUAP), the United States treatment and prevention on PU estimated that 2.5 million patients have pressure ulcers per year and at the hospital level the incidence is 2.5% per year, reaching 60,000 deaths per year5.
In Spain, in the year 2013, the 4th National Prevalence Study of PU was carried out, in which a high prevalence was found in the Intensive Care Unit, reaching up to 22%. In the same way, similar results are shown in other countries. Germany presented 24.5%, Brazil showed 32.7%, and China reached 11.9%. Likewise, in this study, it was highlighted that the proportion of PU that develop within the hospital environment reached up to 65%6.
At the Latin America level, two multicenter studies were carried out in Mexico which indicated that the crude prevalence of PU was 12.94% and 17%, respectively7. In South America, Brazil reports a prevalence of 41.1%, and Chile has a prevalence of up to 38% in the Intensive Care Unit8; while in Peru studies show prevalences between 11.4% and 16%9.
Because they have the property of being preventable, legal demands concerning UPs are very frequent. Currently, they are increasing in developed countries such as the United Kingdom and the United States. According to specialists, they will soon be all around the world, due to its great importance with the effect on the deterioration of health, economic loss, on the quality of life and in health systems10.
Concerning everything expressed, the present study is proposed to determine the clinical-epidemiology indicators associated with pressure ulcers in patients hospitalized in the Medical Service of the Hipolito Unanue National Hospital in 2016-2017.

METHODS
An observational, analytical and retrospective. The population was made up of all hospitalized patients in the service of Medicine with the diagnosis of pressure ulcers of the Hipólito Unanue National Hospital in 2016 -2017.
In total, we reviewed and analyzed 93 clinical histories, and used a data collection card with the following study variables: sex, age, the severity of pressure ulcer, stage, location, levels of albumin, hemoglobin, absolute lymphocytes, and pathology.
A recollection of data was collected in Excel that was subsequently made in SPSS version 25, in which it was performed a descriptive, bivariate and multivariate analysis by using the Chi-square test, with a p-value <0.05 as statistically significant to obtain the necessary results for the investigation.

RESULTS
We analyzed the medical records of 93 patients, who met the inclusion and exclusion criteria of the investigation. Figura 1. 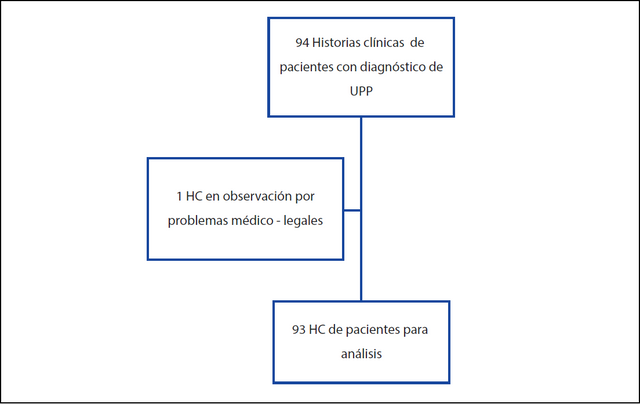 Figure 1. Flow diagram of the number of patients in the study


In table 1, the prevalence of pressure ulcers is shown in hospitalized patients in the internal medicine service during 2016 - 2017. These results found a global incidence of 1.61%, of which when distributing them according to age group, in the population of elderly adults, it was observed that the prevalence increased to 7.43%, thus showing 69 patients with PU.


Table 1. Prevalence of pressure ulcers according to age group.


Table 2. Distribution by sex of patients with pressure ulcer. 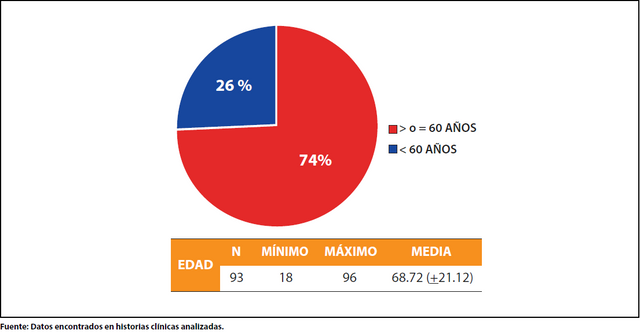 Graph 1. Percentage according to age group characteristics in the population.


Figure 3 shows the frequency of patients with pressure ulcer according to the stage presented, finding that stage II is the most frequent with 30 patients presenting this lesion, followed by the stage IV what account with 29 patients and the stage III with 25. However, when grouping these injuries by severity, it displays that the severe state, which includes stages III and IV, is the most frequent with 54 patients affected. 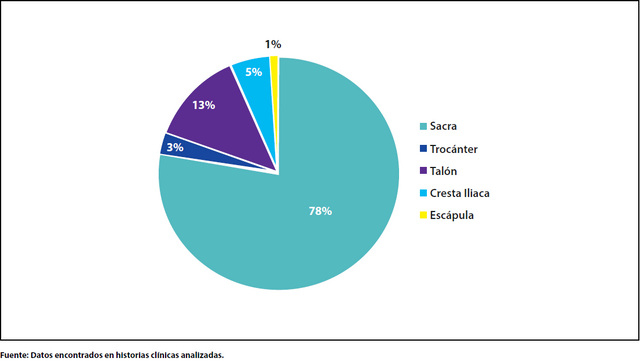 Graph 3. Frequency according to location.


Graph 5, shows the pathologies found in the patient, of whom 30 had a history of DM - HTN (diabetes mellitus and hypertension), followed by 23 patients with a history of DCV, 12 patients with pneumonia, 10 with spinal cord injury, 7 had TBC and 10 patients otherpathologies. Concerning the affected system, it was observed that the neurological affectation was the most frequent with 45.2%, followed by involvement of the cardiovascular system (34.4%). 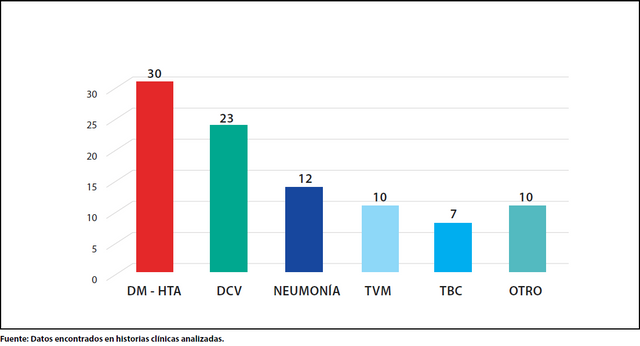 CONCLUSIÓN
In the study carried out, it is concluded that those older patients (> 60 years) are the group that is most affected by pressure ulcers due to the degeneration of the skin over the years as well as extrinsic factors. When making the bivariate and multivariate analysis, we obtain that the presence of indirect signs of malnutrition as hypoalbuminemia is closely related to the presence of greater severity in pressure ulcers. Also, the presence of lymphopenia, the indicator of the compromise of the immunological state, is also significantly associated with the presence of ulcer due to severe pressure, showing that an adequate response cannot be generated against an injury.

Recommendations:Conduct further evaluation by a thorough physical examination to prevent patients can be complicated during their hospital stay.

Authorship contributions: The authors involved in the generation, editing and final approval of the original article

Conflict and interest: The authors declare no conflict of interest in the publication of this article.