ABSTRACT
Objetive: The lymphocyte/monocyte index (ILM) has been described as an inflammatory prognostic parameter in many hematological diseases and solid tumors. The present study aimed to evaluate the prognostic value of the lymphocyte/monocyte index in the survival of patients with diffuse large B-cell lymphoma (DLBCL). Methods: The present is an analytical, longitudinal and non-experimental study. Patients diagnosed with diffuse large B-cell lymphoma of the Edgardo Rebagliati Martins hospital from 2010 to 2017 were selected. Results: 1121 patients were included, 57% female, 66.1% older than 60 years. Regarding the Performance Status Zubrod, 66.5% corresponded to the degree of best forecast 0 and 1; 59.5% presented associated B symptoms. Nearly 60% were stages I and II, and 57% presented extranodal involvement. We show that the ILM is significant for overall survival in the bivariate Cox regression analysis, not reaching significance in the multivariate. Conclusion: ILM is a potentially accessible and straightforward prognostic biomarker for our population with diffuse large B-cell lymphoma.
Key words: Lymphocytes; Forecast; Non-Hodgkin lymphoma. (source: MeSH NLM

INTRODUCTION
Diffuse large B-cell lymphoma (DLBCL) is the most frequent non-Hodgkin lymphoma subtype in the world1. It reaches up to 66% of all lymphomas in our environment2. It is an entity that can be cured even with advanced disease but one-third of patients will relapse3. The interaction of malignant cells and the tumor microenvironment composed of inflammatory cells has implications for the response and survival of patients4.
The most important prognostic model for this disease is the International Prognostic Index (IPI) that allows identifying according to 5 clinical variables (age, stage, lactic dehydrogenase, extranodal sites, and ECOG), three risk categories: low, intermediate and high5. This model still has imperfections. NCCN-IPI is a new prognostic model for DLBCL that prioritizes the prognostic value of lactic dehydrogenase and age5.
The current concept of cancer defines it as a disease of genes, but with common inflammatory mechanisms as a backdrop, the persistent inflammation and the immune dysregulation that they produce activate oncogenic mechanisms6-7. Inflammatory markers can contribute to determining the prognosis in cancer. One of these inflammatory markers is the lymphocyte/monocyte index. Previous studies show that the systemic response is protumoral8. Lymphopenia reflects a specific depressed immune activity. Also, lymphopenia is correlated with poor prognosis in other hematological diseases such as Hodgkin lymphoma, multiple myeloma, acute leukemia, and peripheral T-lymphoma9-10. Monocytosis is a subset of systemic and microenvironmental immunosuppression, which has been identified in DLBCL8.
There are multiple prognostic indicators for diffuse large B-cell lymphoma (DLBCL), including the international prognostic index (IPI) and the gene expression profile (GEP) to classify the disease with a germinal center and activated B cell subtypes, this last houses a lower forecast. More recently, it was found that macrophages associated with the tumor (MAT) and the proportion of lymphocytes to monocytes (ILM) have prognostic implications in the DLBCL. However, a consensus has not yet been reached in terms of the importance of each one11.
In the present study, we evaluated the prognostic value of the lymphocyte/monocyte index in patients with DLBCL.

METHODS
Retrospective longitudinal study. The cases of LCGBD diagnosed at the Edgardo Rebagliati Martins National Hospital during the 2010-2017 period were included in the study; cases with incomplete medical histories were excluded. No sampling was done, we worked with the entire population that met the selection criteria because it is small and accessible.
The patients' medical records were reviewed, obtaining information on the time in months of survival, ILM, as well as sociodemographic, clinical and laboratory variables:
• Sociodemographic variables: Age, sex.
• Clinical variables: Presence of B symptoms, clinical stage, extranodal involvement, ECOG scale.
• Laboratory variables: Leukocyte count, lymphocytes, neutrophils, monocytes and platelets. Concentrations of hemoglobin, albumin, lactic dehydrogenase (DHL), beta-2 microglobulin, international prognostic index (IPI) and NCCN IPI.
The information obtained was recorded in a data collection instrument and was transformed into a database, then it was evaluated whether the lymphocyte / monocyte index was a predictor of the survival of patients with LCGBD.
For the statistical analysis, the SPSS program version 23 for Windows was used. Univariate statistics were performed based on obtaining frequencies, measured percentages of central tendency and dispersion. Survival analysis was performed using the Kaplan Meier technique. For the bivariate analysis of global survival, the Cox proportional hazards model was used, estimating the hazard ratio (HR) and confidence intervals. The calculations were made with a confidence level of 95%.
Regarding the ethical aspects, the information obtained was confidential, which has only been used for the purposes of this study. 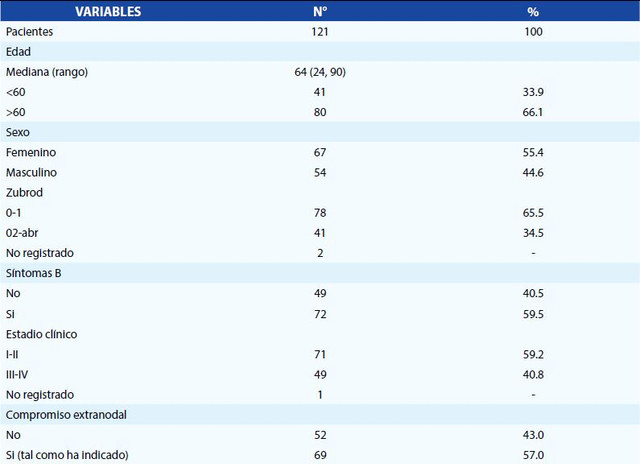 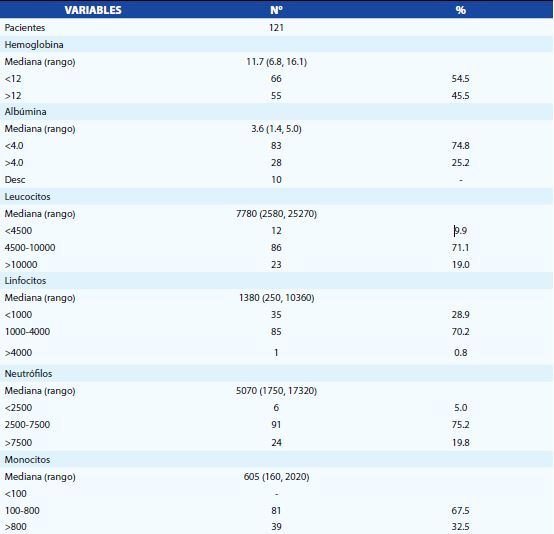 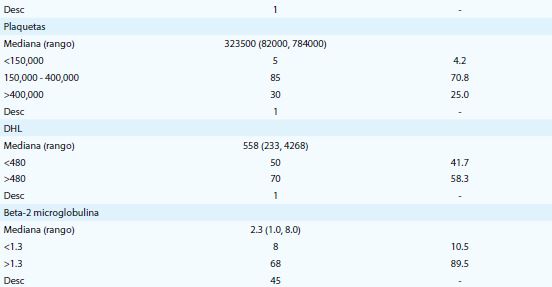 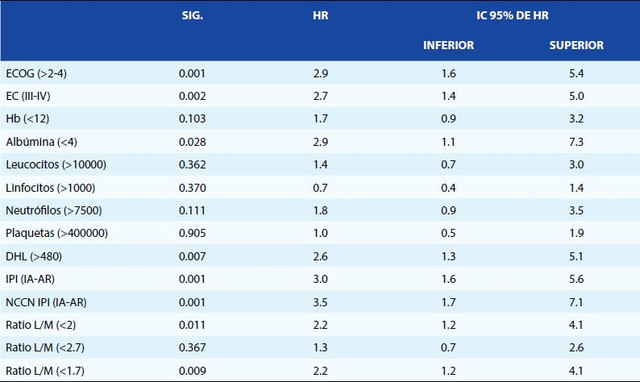 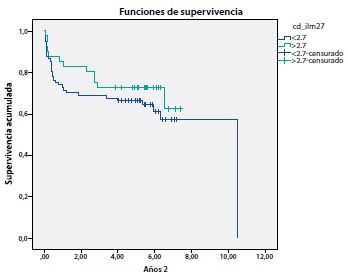 
DISCUSSION
In recent years, several biomarkers have been identified to detect patients with LCGBD of poor prognosis, including gene expression profile11, mutational analysis12, immunohistochemistry-based detection13,14 and interim evaluation with positron emission tomography5,16. The most important prognostic model for this disease is the IPI that allows identifying, according to 5 clinical variables (age, stage, lactic dehydrogenase, extranodal sites and ECOG), three risk categories: low, intermediate and high17,18.
Since the introduction of rituximab, the IPI has been revised (R-IPI) to better reflect the survival associated with immunochemotherapy regimens. In contrast to the IPI, NCCN IPI identifies three different prognostic groups: very good, good and poor18; whereas, Zhou introduces the NCCN IPI that prioritizes the prognostic value of lactic dehydrogenase and age19. The advantage of the NCCN-IPI over the IPI is the ability to discriminate the subgroups of low and high risk. Despite this, a large group of patients with unfavorable factors are not adequately characterized.
Inflammatory markers such as ILM may constitute prognostic factors in LCGBD20, and there is research that shows that ILM correlates with overall survival as well as with the progression-free survival of patients1,10. ILM depends on lymphopenia and / or monocytosis, observing that lymphopenia correlates with poor prognosis in other hematological diseases such as Hodgkin lymphoma, multiple myeloma, acute leukemia and peripheral T lymphoma9,21-23; On the other hand, monocytosis is an indicator of systemic immunosuppression, which has been identified in LCGBD8. Recent reports identify the ratio between absolute neutrophil counts and absolute lymphocyte counts (INL) as predictors of survival in cancer patients24.
The present investigation found that the ILM is a predictor of the survival of patients with LCGBD, so it would constitute a potential index of prognosis that presents the advantages of a low cost and easy obtaining. This coincides with that reported by Romano et al25 who retrospectively evaluated INL and ILM in patients with a recent diagnosis of Hodgkin lymphoma PET-2, finding that after a follow-up of 68 months, ILM was one of the independent predictors of progression-free survival using in the early stage. The results obtained are also similar to that reported by Matsuki et al11 and Wang et a4who conclude that ILM <2.7 could be used as a biomarker of poor prognosis, easy to implement and widely available, particularly for patients with treated LCGBD. with rituximab. This is confirmed by a meta-analysis conducted by Sun et al. which shows that an ILM <3 is a predictor of overall survival (HR = 1.79) and disease-free survival (HR = 2.21)
The main limitation found in the present study was the small number of cases participating in the analysis of overall survival and the bivariate analysis with the proportional hazards model of Cox, which prevented multivariate analysis. It is necessary to continue this line of research for an adequate and practical characterization of lymphomas and to be able to design more precise prognostic and therapeutic strategies.

CONCLUSION
The ILM could be used as a prognostic index because it is a predictor of the overall survival of patients with LCGBD of the Edgardo Rebagliati Martins National Hospital.

Authorship contributions: The authors participated in the genesis of the idea, project design, data collection and interpretation, analysis of results, preparation of the manuscript, present research work.