CHILDHOOD OVERWEIGHT AND OBESITY IN THE REGIONAL HOSPITAL OF MOQUEGUA

ABSTRACT
Objetive: To establish the prevalence, epidemiology, clinical, biochemical characteristics and images of overweight and obesity in children from 5 to 10 years of age treated in outpatient pediatrics of the Moquegua Regional Hospital between August to December 2017. Methods: A descriptive, observational, cross-sectional study was carried out; a database was created in the SPSS version 23 program, descriptive statistics were used to determine if there were significant differences between the variables Chi-square. Results: Of a total of 170 children from 5 to 10 years of age attended in the outpatient clinic of pediatrics of the Moquegua Regional Hospital, 88 children (51.8%) were found with overweight and obesity according to the WHO 2007 Diagnostic criteria; 36 children (21.2%) with overweight and 52 children (30.6%) with obesity. Conclusion: The present study shows an increase in the prevalence of overweight and obesity in children from 5 to 10 years old, with epidemiological, clinical, biochemical, ultrasound and radiographic images very important to develop non communicable diseases such as diabetes, hypertension, dyslipidemias, cancer, metabolic syndrome, among others, causing an inadequate quality of life. As a result, a public health problem is created and therefore an increase in morbidity and mortality in our Moquegua Region.
Key words: Body mass index; Overweight; Obesity. (source: MeSH NLM

INTRODUCTION
Obesity is a public health problem and has been called the "21st Century Epidemic" because of its impact on morbidity and mortality, quality of life, and health expenditure. It is presented globally in developed countries and the process of development, and it has also increased the contribution of known risk factors that cause it1.
Overweight and obesity cause the death of around 2.8 million people in the world indirectly or indirectly, associated with diseases-communicable chronic diseases (CNCD) such as diabetes mellitus, coronary ischemic disease and some types of cancer2,3.
In Peru, one in four children between 5 and 9 years old has overweight or obesity4,5. In the Moquegua Region in the age group of 5 to 9 years, the nutritional problem focuses on the magnitude of overweight and obesity; where 4 out of 10 children are overweight. It should be noted that this proportion is even higher than the national average and four greater in children under 5 years old. In the age group from 10 to 19 years old, there are fewer cases of subjects with overweight and obesity, than the previous age group. Also, 2 out of 10 subjects are overweight, but both surpass the national prevalence4.


Peru has not been oblivious to the problem of overweight and obesity and in mid-May of 2013 enacted Law No. 30021 "Law on the promotion of healthy eating for children and adolescents." The primary purpose is to promote healthy eating aimed at students of the fundamental level and help with their physical activity. Help with the implementation of kiosks and healthy diet in educational institutions regularly. Also with the implementation of the Observatory of Nutrition of Overweight and Obesity and advertising information and other practices aimed at children and adolescents to reduce and eliminate diseases linked to overweight, obesity and chronic diseases. This law has had mixed opinions, but it is undeniable that it contributes to decreasing the high prevalence of overweight, obesity and consequently chronic diseases not transmissible in the Peruvian population.
In recent decades, the general population has adopted unhealthy lifestyles such as the consumption of fast food with high caloric content, and at the same time, physical activity has decreased. A reason that obesity has increased in the country could be because of the stability of the economy in Peru, which is reflected in the greater acquisitive capacity in households. Socio-economic changes have also been noticed in the population, especially in urban areas like transportation ways that the community uses to move for short stretches, the use of elevators, the use of technology for entertainment which contributes to the increase of sedentary lifestyle, mainly in adults and children7,8.
The World Health Organization (WHO) defines childhood obesity when the body mass index (BMI) exceeds the 97% percentile for determined age and sex, of overweight in those children who have a BMI between the 85% and 97%9.
The Task Force report mentions that they have not yet been found the right strategies to stop this problem, which is why it is necessary to increase the interest of health institutions10, implying changes in the micro and macro environment that increase prevention, detection, and treatment11. To know the prevalence, epidemiological characteristics, clinical, biochemical and imaging of overweight and obesity in girls and boys from 5 to 10 years treated in an outpatient pediatric office of the Moquegua Regional Hospital; the present study was made.

METHODS
A descriptive, observational and transversal.
The objective was to establish the prevalence, characteristic clinical epidemiology, biochemistry and imaging of overweight and obesity in children from 5 to 10 years of age, treated in outpatient pediatrics of the regional Hospital Moquegua between August to December of the year 2017.
The sample consisted of all boys and girls from 5 to 10 years old who were treated in the pediatric office of the Regional Hospital Moquegua during the study period. The present investigation was authorized by their parents and/or attorneys, through informed consent.
The nutritional evaluation (normal weight, overweight, obesity) was established according to body mass index (BMI): weight/size2, creating the percentiles of BMI according to the WHO 2007.
WHO defines childhood obesity when the index of body mass (BMI) exceeds the percentile values of 97% according to age, and sex. Overweight are those boys and girls who have a BMI between the 85th percentile and 97%9. The abdominal perimeter (PA) was obtained with a tape measure taking into account the location of the midpoint between the last rib and the iliac crest. For the abdominal perimeter, tables were established from the 10th percentile to the 90th percentile in both males as women according to age12. Both anthropometric measures were performed according to methodology recommended by the National Center for Food and Nutrition of the National Institute of Health Peru (CENAN). Systolic and diastolic blood pressure was obtained by to the use of bracelets according to age, considering percentiles from 5% to 95% percentile according to size and age of the patient13. For the evolution of the biochemical characteristic (total cholesterol, triglycerides, LDL cholesterol, and HDL) percentile tables were established from the 50th to 95th percentile according to age and sex of the patient14. All the auxiliary biochemical analysis (lipid profile and glucose) were taken on an empty stomach. Supplemental imaging examination (ultrasound)hepatic) was performed to determine hepatic steatosis, which was conducted by the radiology specialist of the Moquegua Regional Hospital.
All the data were extracted from the clinical history, also provided by parents or companions of the patients in the outpatient clinic of pediatrics. The information obtained was recorded on a sheet of data collection developed for this study, subsequently moved to a worksheet in Excel to then create the database and process them in the SPSS program Version 23.
Ethical aspects
The study did not involve any health risk and integrity of the participants. The parents or guardians of the boys and participating girls were previously informed on the objectives and purposes of the study.
Statistical analysis
A database was created in the SPSS Version program 23, descriptive statistics were used to determine if there were significant differences between the variables, Chi-square was used.


Table 1. The general prevalence of overweight and obesity.

Table 2. Prevalence of obesity and overweight according to age and sex.

In Table 2, it is observed that the age groups that present more cases are the 6 and 8 years old with the diagnoses of overweight and obesity, respectively. The male sex predominated in overweight and obese patients. It was found a significant statistical relationship between males and obesity (p <0.05).


Table 3. Prevalence of obesity and overweight according to age and sex. 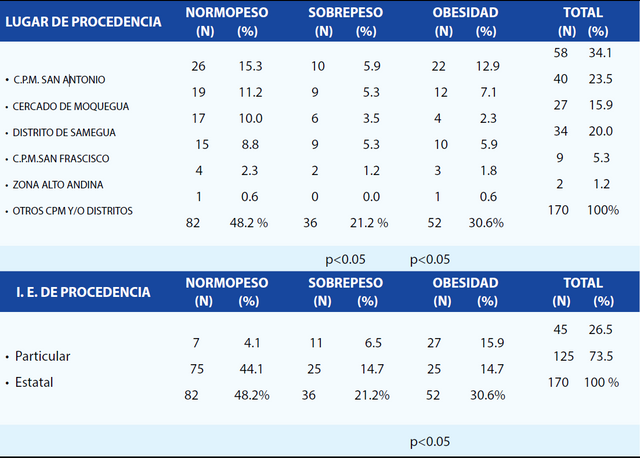 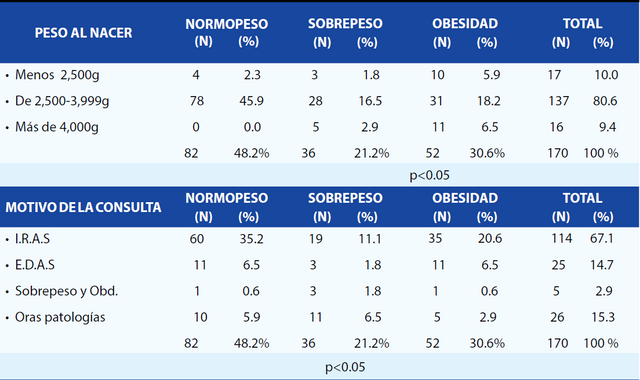 In table 3, regarding the other epidemiological characteristics like the place of origin. It was found that out of a total of 170 boys and girls that treated in the pediatric office of the Hospital Regional Moquegua, 10 children (5.9%) and 22 girls (12.9%) with overweight and obesity, respectively were from the Centro Poblado Menor (C.P.M) of San Antonio. This factor had a significant relationship to overweight and obesity (p <0.05); not like other places of origin of less frequency as San Francisco, Cercado de Moquegua among others.
The educational institution more frequency of overweight patients is the State Educational Institution with 25 obese patients (14.7%) and Pivate Educational Institution had 27 cases of Obesity 15.9%), the last one with a statistically significant relationship (p <0.05).
At analyzing birth weight, we found 28 overweight children (16.5%) and 31 (18.2%) with obesity, in both cases, the birth weight was normal (2,500-3.999g), constituting that normal birth weight and obesity have a significant relationship (p < 0.05).
The reason for the pediatric consultation of boys and girls 5-10 years old in the Regional Hospital of Moquegua during the study period were infections respiratory symptoms in children who presented overweight 19 (11.1%) and obesity 35 (20.6%). Evaluated in an outpatient clinic for an acute respiratory infection, and being diagnosed with obesity has a significant relationship (p < 0.05).
Finally, we found 19 (11.2%) and 47 (27.6%) children with overweight and obesity respectively not perform physical activity for at least one hour outside of the school or kindergarten schedule, this relationship is significant (p < 0.05). 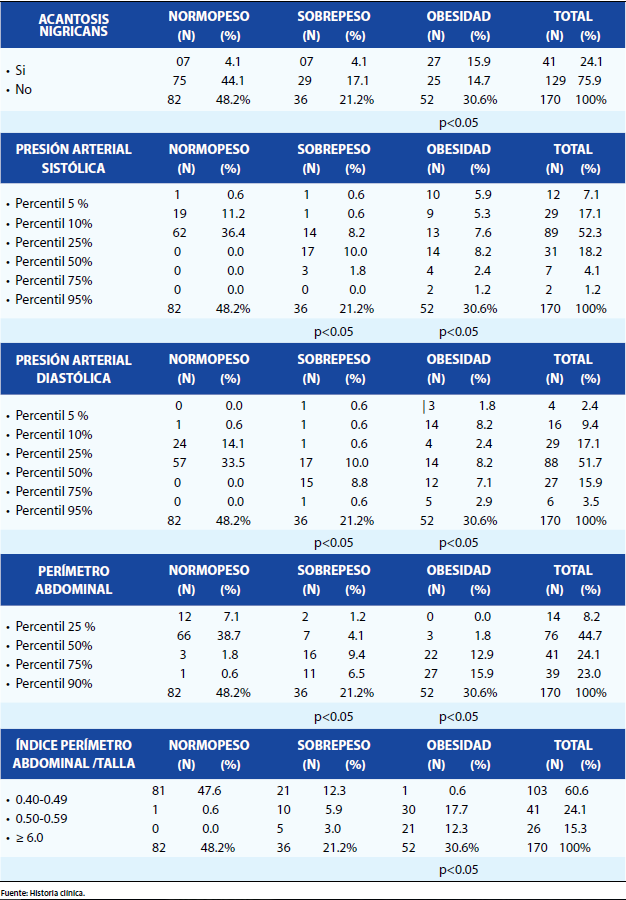 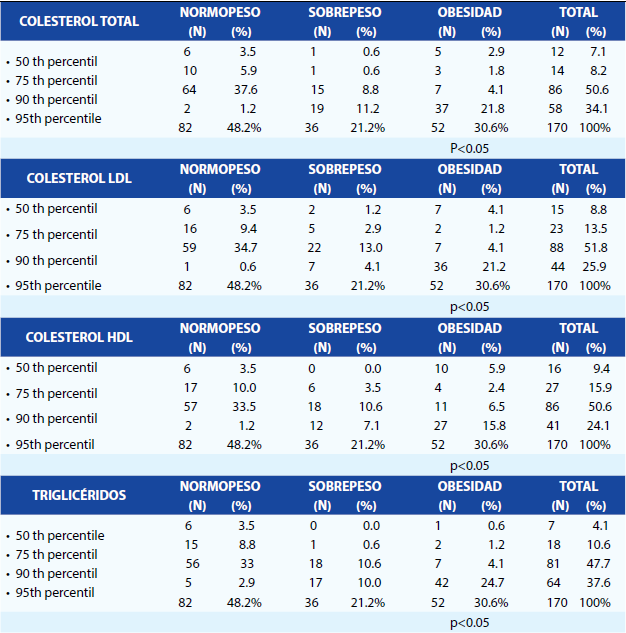 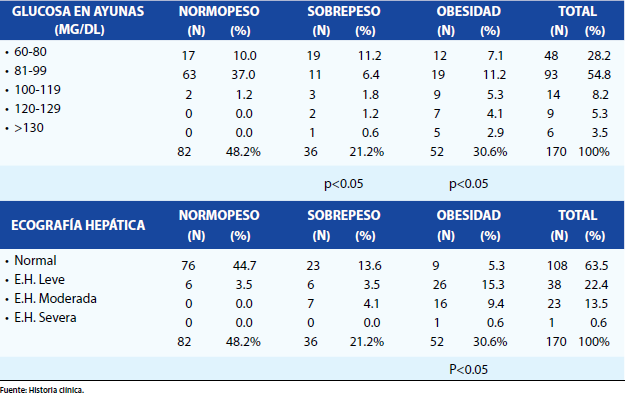 CONCLUSSION
The present study shows an increment in the prevalence of overweight and obesity in boys and girls from 5 to 10 years old with epidemiological, clinical, biochemical characteristics as well as imaging to develop diseases that are not transmissible as diabetes, hypertension, dyslipidemias, cancer, metabolic syndrome, and others. Overweight and obesity cause an inadequate quality of life, resulting in a public health problem and therefore increasing morbidity and mortality in our population.

Authorship contributions: The author participated in the genesis of the idea, project design, collection and interpretation ofdata, analysis of results, preparation of the manuscript, present research work.