ABSTRACT
Introduction: Diabetic foot is one of the most serious and frequent complications of diabetes mellitus, for this reason it is important to know the risk factors that trigger it. Objetive: To determine the risk factors associated with diabetic foot in the PNP Luis N. Sáenz Hospital, 2017. Methods: Observational, quantitative, retrospective, analytical, case-control study. The study population consisted of 165 patients (55 cases and 110 controls) seen in the endocrinology division in 2017. Risk factors, modifiable and non-modifiable associated with the development of diabetic foot were studied. The information of the clinical histories was collected through a data collection form. This data was analyzed by means of the SPSS program version 25.0 using the statistical models of Chi-square and the odds ratios with a level of significance less than 0.05%, and a range of 95% confidence. Results: The risk factors associated with diabetic foot are related to the time of diagnosis (p:0.000; OR: 12.77; IC: 4.12 - 39.60), wrongly controlled glycosylated hemoglobin (p: 0.029; OR: 4.55; IC:1.17 - 17.68), onychomycosis (p: 0.014; OR: 7.10; IC: 1.48 - 34.07); history of smoking (p: 0.031; OR: 2.66; IC: 1.09- 6.34) and chronic kidney disease (p: 0.047, OR: 3.023, CI: 1.01 - 9.0). Conclusion: It is concluded that there is a significant statistical association between developing diabetic foot with the time of illness, poorly controlled glycosylated hemoglobin, onychomycosis, chronic kidney disease, and smoking history.
Key words: Foot diabetic; Factors of risk do not modifiable; Factors of risk modifiable. (source: MeSH NLM)

INTRODUCTION
The World Health Organization (WHO) in 2016 reported that, the adult population with diabetes mellitus in 2014 amounted to 422 million in the world. According to Demographic and Family Health Survey 2016 (ENDES), type 2 diabetes mellitus is a public health problem at the national level. It is an issue due to its prevalence (3.2%), the high cost of treatment, and management of complications1,2. Diabetic foot adds long hospital stays in contrast to any other complication of type 2 diabetes mellitus, with significant morbidity and mortality3.
The factors associated with diabetic foot are divided into two large groups which are non-modifiable, and modifiable. In this study the non-modifiable risk factors were analyzed: sex, age, and time of evolution of the disease greater than ten years. The modifiable factors such as glycosylated hemoglobin greater than 7.5%, history of smoking, onychomycosis, obesity, overweight, peripheral vascular disease, peripheral neuropathy, the presence of arterial hypertension, chronic kidney disease and dyslipidemia.
Diabetic foot, undoubtedly today, represents one of the most serious and frequent complications of diabetes mellitus 2. For this reason, it is important to determine the risk factors associated with diabetic foot in the PNP Luis N. Sáenz Hospital during the year 2017.
METHODS
Type and design of research
The research design of this study is observational, quantitative, retrospective, analytical type, of cases and controls. It was developed in the context of the IV COURSE - WORKSHOP OF GRADUATION BY THESIS according to the published and methodology approach4. Population and sample
Population and study sample included patients diagnosed with diabetes mellitus type 2 treated in the endocrinology division of the PNP Luis N. Sáenz Hospital during the months of January to December in 2017. The sample consisted of 165 patients: 55 cases diagnosed with diabetes mellitus type 2 as well as diabetic foot, and 110 controls with a diagnosis of diabetes mellitus type 2 without diabetic foot were the controls, with a ratio of 1: 2.
Data processing and analysis technique.
The "IMIN" calculator was used (IV COURSE - WORKSHOP OF GRADUATION BY THESIS ). Based on the bibliography review it was considered, an incidence of 9.8%, an odds ratio of 3.8, a level of statistical significance of less than 0.05%, and a range of 95% confidence.
The information was obtained from the medical records of the patient and recorded in a data collection sheet. The program IBM SPSS Statistics 25.0 was used to process them. Descriptive statistics, bivariate analysis (Chi-square and Odds ratio), and logistic regression of the variables of interest were performed.
RESULTS
The following variables were evaluated: sex, old age (over 60 years), body mass index (overweight, obesity), disease time over ten years, poor control (glycosylated hemoglobin > 7.5%), peripheral vascular disease, peripheral neuropathy, smoking history, onychomycosis, and comorbidities (arterial hypertension, chronic kidney disease, dyslipidemia).

Graphic 1.Pyramid age/sex of patients treated in the division of endocrinology of the Hospital of Police, January-December 2017

Table 1. Distribution of the index of corporal weight. 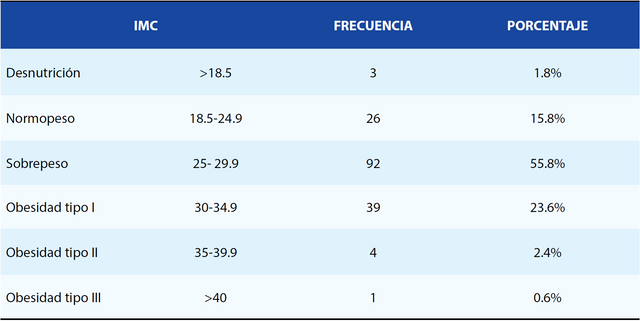 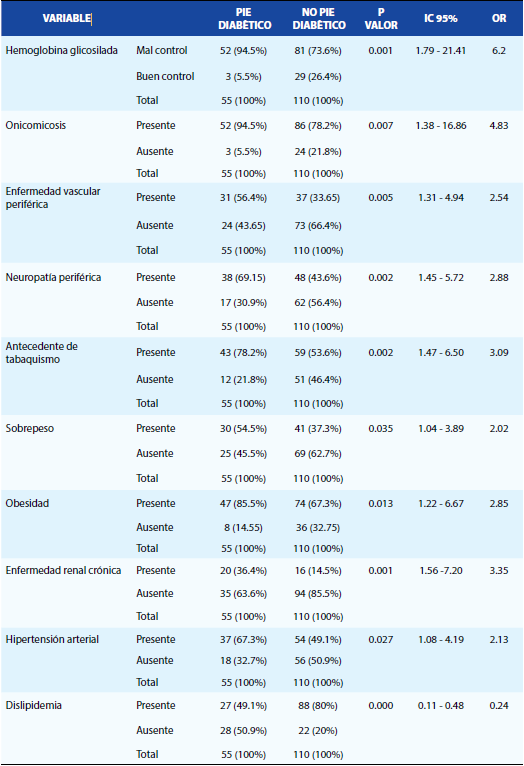 The modifiable risk factors considered in this research study, glycosylated hemoglobin greater than 7.5% (poor control), onychomycosis, peripheral vascular disease, peripheral neuropathy, smoking history, obesity, overweight, chronic kidney disease, hypertension, and dyslipidemia are statistically associated with diabetic foot. (Table 3).
Patients who have dyslipidemia have 0.24 times more risk of developing diabetic foot, the association is statistically significant (p: 0.000), and because it presents an OR of 0.24 it behaves as a protection factor. It has a confidence interval of 0.11 - 0.48, that by not containing the unit it is statistically significant.

Table 4. Multivariate analysis of the variables associated with diabetic foot. 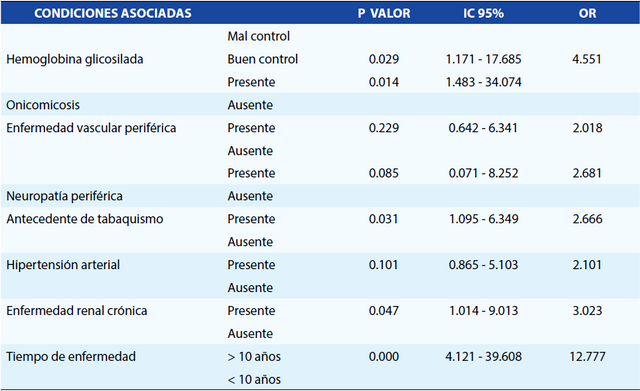 Authorship contributions: The authors involved in the generation, drafting and final approval of the article alsoYAE in data collection.