METHODS
An analytical, quantitative, observational case study and control design. The variables were evaluated: time of illness and pre-medication as risk factors for the development of perforated appendicitis.
The selection of patients was carried out using the probabilistic design technique. The sample consisted of 234 patients: 78 cases were patients with a postoperative diagnosis of perforated appendicitis and 156 controls, who did not present a diagnosis of perforated appendicitis.
Data collection was performed using the database of medical records of patients diagnosed with acute appendicitis after surgical treatment. The information obtained in the collection form was made from the software for data processing, the IBM -SPSS Statistics version 22.0 program.
For the statistical analysis of the data, its association was determined by means of Odd Ratio, with an IC 95% and a significance p (<0.05) by the Chi-square test. 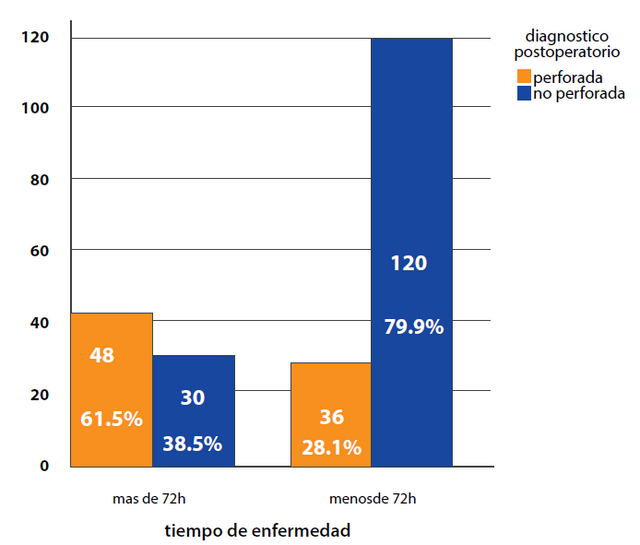 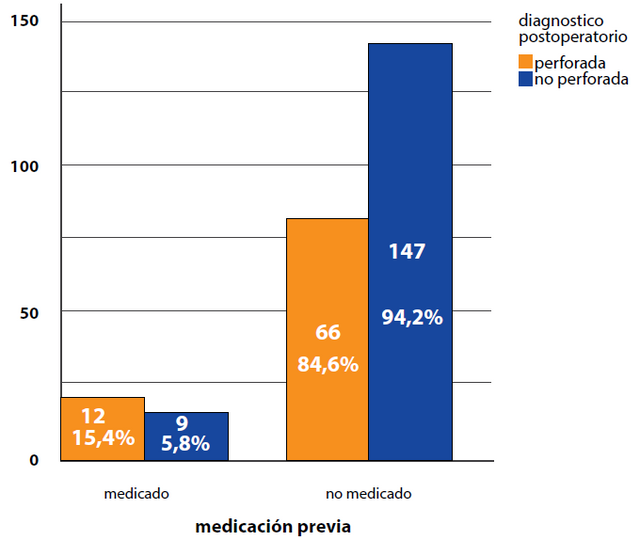 
Table 1. Analysis bivariate of factors of risk for appendicitis perforated in the Hospital of Window January - September 2017. 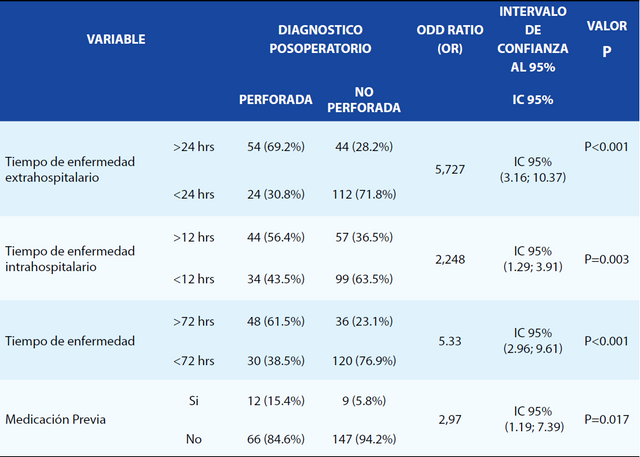 In our study, it was found that 61.5% of patients with disease time greater than 72 hours had perforated appendicitis who were 5 times more likely to have perforated appendicitis than patients with a disease time less than 72 hours making it a risk factor to develop perforated appendicitis. Possibly due to factors such as delay time for surgical treatment due to lack of shifts of service personnel, lack of surgeons and also due to the use of pre-medication with analgesics.
In the study conducted in the regional hospital PEMEX Salamanca, Mexico, it was found that 58.9% of patients were premeditated and developed perforated appendicitis. It was also found that the average of the hours elapsed between the beginning of the clinical check and the surgical decision in the group of non-medicated patients was significantly lower than that of the group of medicated patients. Reaching the conclusion that the previous medication in patients with acute appendicitis is associated with the delay in making the surgical decision, with the respective increase in complications, such as appendiceal perforation. The study that is most striking in this case is the study carried out in the general surgery service of the new Durando sanatorium in Mexico, where it establishes that the previous medication increases the risk of appendiceal perforation 23 times.
Regarding premedication, in our results we found that of the total of patients, 15.4% had perforated appendicitis and it could be determined that patients that were premedicated are 2 times more likely to present perforated appendicitis than patients without pre-medication. It may be due to the fact that the use of the medication alters in a certain way the health of the patient, also the fact of taking a previous medication contributes to the delay of the patient when going to the health center, since it is waiting for a possible improvement due to the use of the medication.
In the same study already mentioned in the general surgery service of the new sanatorium hospital in Durando in Mexico, we wanted to specify that they only mention self-medication as a risk factor without taking into account the medications prescribed by a doctor, that is, unlike our research where we can see that 83.3% of patients with a previous medication were self-medicated and only 2 patients, that is, 16.7% were prescribed. The very important fact as it shows that there are still errors when it comes to a diagnosis in relation to abdominal pain, although the percentage is minimal and only 2 cases were found like these in the Hospital de Ventanilla Service.

CONCLUSION
It is concluded that the time that elapses before the surgical intervention and the premedication either self-medication or prescribed by the doctor are factors to progress to acute appendicitis complicated in patients with the diagnosis of acute appendicitis.

Contributions of authorship: The authors participated in the idea, design of draft, harvest and interpretation of data, preparation of the manuscript of the version end of Article.