ABSTRACT
Objective: To determine the association between maternal-fetal epidemiologic indicators and the presence of uterine atony in a primary cesarean postpartum at the Good Hope clinic during the period of August 2017 - August 2018. Methods: An observational, analytical, retrospective and quantitative study, type of cases and controls was carried out. The dependent variable was the atony of the uterus, and the independent variables were maternal age, multiple gestations, polyhydramnios, pregnancy, parity, maternal anemia, concomitant diseases, fetal weight, fetal presentation, and cesarean section indicators. The population consisted of 106 cases and 212 controls (ratio 2:1). For the inferential statistics, a bivariate analysis was used to find the Odds Ratio, 95% confidence intervals. The p-value <0.05 were considered statistically significant. Results:From the 318 patients in the study, the mean age was 30.87 ± 0.298 years. Associated variables to uterine atony in the bivariate analysis were age over 30 years, multiple gestation, polyhydramnios, low birth weight, and macrosomia. In multivariate analysis were polyhydramnios (OR:5,973, 95% CI: 2,443-14,603) and macrosomia (ORa : 6.280, 95% CI: 2,307-17,095). Conclusion: There was an association of uterine atony with polyhydramnios indicators and fetal macrosomia.
Key words: Uterine Inertia, Uterine Hemorrhage, Polyhydramnios, Fetal Macrosomia. (source: MeSH NLM)

INTRODUCTION
From the beginning of the 20th century, the greatest threat to the safety of women of childbearing age has been the postpartum hemorrhage (PPH), which is the primary cause of maternal morbidity and mortality in the countries of low and middle income (LMIC). This is one of the main causes of morbidity in high-income countries. In the world, severe PPH (defined as loss of 1000 ml of blood) affects 1.6 million women and represents 130,000 to 140,000 maternal deaths every year. It means that there are approximately 380 deaths every 24 hours or approximately 1maternal death for each day of the year1.
According to the World Health Organization (WHO), about 529,000 maternal deaths occur when year, occupying a priority place in approaches national and international politics1. It also serves, as a reflection of social inequality, inequality of gender and evident lack of response from the Health System.
In the document presented by the General Directorate of Epidemiology (DGE) of the Ministry of Health of Peru, the average maternal mortality ratio during 2002-2011 was 111.92 which has decreased in the last decade, but the figures continue to be one of the highest of Latin America. In the continent, every year they are 34 000 maternal deaths, of which most occur in South America. In 2015, Peru ranked sixth among the countries with rates of maternal mortality, after Guyana, Bolivia, Suriname, Paraguay, and Venezuela12.
It is important to note that in the last decade, the maternal mortality in Peru has decreased by 66% to 67 deaths per 100 000 live births4 and the achieving its objectives of the millennium of the reduction of 75% for 20152. During this same period, maternal mortality has increased in some high-income countries5,6. However, although Peru has made impressive progress, HPP is still the cause of 40% of maternal deaths, and the disparities between urban and rural indigenous areas continue. The causes of postpartum hemorrhage are diverse, one of the main causes is uterine atony, and the hypertensive diseases of pregnancy (preeclampsia and eclampsia)9, it is necessary to know the main determinants of uterine atony in our population, to be able to act timely when this is presented and apply all the protocols required to prevent it.
The primary objective of the present study was to determine the association between MATERNAL-FETAL CLINICAL EPIDEMIOLOGIC INDICATORS and the presence of uterine atony in primary cesarean postpartum in a private clinic of Lima-Peru during the period ofAugust 2017 - August 2018.

METHODS
Observational, analytical, retrospective and quantitative type cases and controls. The population consisted of 318 postpartum patients with primary Cesarean section in the gynecology department of the clinic Good Hope, from August of 2017 to August 2018.
We worked with a case-control ratio of 1: 2, with106 cases and 212 controls, women diagnosed with uterine atony, described in the intraoperative report. We excluded those patients with a history of previous cesarean or any other uterine surgery and to those with medical history with incomplete data material and/or fetal.
Documentation was used as a technique data collection, recorded in medical records through the Quick View program and CIE10. The data collected were entered into a database inSPSS version 23.
The bivariate analysis was used to find the Odd Ratio, with their respective 95% confidence intervals and a significance p (<0.05) through the Chi test -square. Finally, multivariate analysis was performed to get adjusted ORs.

RESULTS
Information was collected from 318 clinical histories and medical reports. The average total age was 30.87 ± 0.298 years, for the controls it was 28 ± 0.423 years whereas, of the experimental cases, it was of 33 ± 0.168 years. The main indication for cesarean was Cephalopelvic disproportion with 33.3% and suffering acute fetal distress with 7.9%. In regards to concomitant diseases during pregnancy, it was found that the most frequent was uterine myomatosis with 7.9%. Most patients, 60.7%, had no presence of concomitant diseases. Table 1.


Table 1. Bivariate analysis of the factors associated with uterine atony. 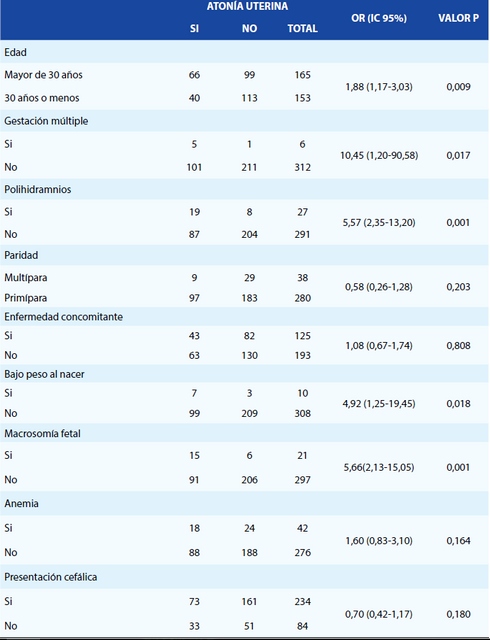 
Table 2. The relationship between multiple gestations and the presence of uterine atony.

Furthermore, concerning polyhydramnios, it was found that 17.92% (19) of the postpartum women that had uterine atony presented polyhydramnios; this relationship is statistically significant (p = 0.001), figure 1.

Graph 1. Relationship between polyhydramnios and the presence of uterine atony.

Graph 2.The relationship between macrosomia and the presence of uterine atony

Table 3.Multivariate analysis of the factors associated with uterine atony.

DISCUSSION
LMaternal death is one of the most critical public health problems; uterine atony is one of the leading causes of maternal mortality and is avoidable. In the present study, it was found that age over 30 years is a risk factor for uterine atony; with an OR of 1.88. However, this relationship was not maintained at the time of multivariate analysis, probably due to a lack of statistical power. This result is similar to those found in other studies. The study of Cavazos et al. in the United States where it was found that women between 15 and 19 years had a higher risk of postpartum hemorrhage, while those older than 35 years had no more risk of postpartum hemorrhage23. Also, another study by Augusto M. et al. at the Almenara Hospital in Lima, Peru, found that the risk factors for uterine atony were, among others, having an age greater than 30 years with an OR of 3.6416. Finally, a study also conducted in Peru, found that in a population of Villa El Salvador had the highest prevalence of uterine atony in women between 19 and 25 years, while in women over 35 years there was no statistically significant difference with respect to uterine atony15.
Likewise, there was a statistically significant relationship with multiple gestation and uterine atony; however, this relationship did not maintain its statistical significance in the multivariate analysis. A case-control study conducted by Butwick A. et al. in the United States in 2017, she also found that multiple pregnancies were a risk factor for postpartum hemorrhage (with an adjusted OR of 8), as well as a risk factor for intrapartum cesarean section (with an adjusted OR of 3.2)14. A similar result was found by Butwick A. et al. conducted in the United States that was published in 2014, where multiple gestations had an adjusted OR of 1.59 for uterine atony in patients who underwent cesarean section20. Also, another study conducted in Peru, at the Guillermo Almenara Irigoyen OR ADJUSTED95 % ICP-VALUELOWER LIMITUPPER LIMITAge over 30 years1,672,9962,806,052Multiple pregnancy6,522,67962,629,104Polyhydramnios5,9732,44314,603,000Low birth weight3,911,87617,465,074Macrosomia6,2802,30717,095,000Hospital in the city of Lima, Peru; found that multiple gestations had an OR of 2.15 for uterine atony, which is an OR lower than that found in our study. There is no data about an adjusted OR in this study concerning this variable16.
In regards to polyhydramnios, a significant association was found in the bivariate analysis, with a crude OR of 5.57; significance that remained in the multivariate analysis with an adjusted OR of 5.97. This difference may be due to the fact that the uterine arteries and veins that travel between the muscle cells of the myometrium have as a mechanism of hemostasis the contraction of these fibers that cause their occlusion with the consequent stoppage of bleeding. The polyhydramnios condition causes a uterine distention that alters the correct contraction of its muscle fibers, creating the atony of the uterus. It means that the uterine bleeding cannot be controlled causing a postpartum hemorrhage that can be fatal. There are not many studies that have explored this relationship. One performed in the Sultanate of Oman did not find an association between postpartum hemorrhage and the presence of polyhydramnios, probably because a study with a very low prevalence of postpartum hemorrhage was performed, of only 2.7%22. However, another study conducted in the United States by Wetta et al. found that there is a relationship between polyhydramnios and uterine atony and hemorrhage24.
In regards to weight, it was found that low birth weight was associated with uterine atony in this study; however, this relationship was not maintained in the multivariate statistics. A study conducted by Nair et al. in India found that newborns with low weights had an adjusted OR of 8.72 compared to those with an adequate weight17.
Regarding weight, it was found that macrosomia was related to uterine atony. This agrees with that reported by Said et al. in a study in Tanzania, where she discovered that one of the most frequent complications of macrosomic babies was postpartum hemorrhage (17.5%) and that this was five times more frequent in macrosomic than in those with normal weight25. A longitudinal cohort study in a group of macrosomic and non-macrosomic babies found that in Iran, one of the most significant associations for fetal macrosomia was the higher incidence of uterine atony24. In the same way, the study developed by Machado et al. in the postpartum of the Uldarico Hospital Rocca Fernandez of Villa El Salvador found that fetal macrosomia was one of the statistically significant risk factors for uterine atony.

Authorship contributions: The author participated in the genesis of the idea, project design, collection and interpretation of data, analysis of results, preparation of the manuscript, present research work.

Conflict of interest: The Author declares do not to have conf Licto of interest.