ABSTRACT
The hepatic cystadenoma is a very rare neoplasm, with less than 250 cases reported in the world literature, which occurs more frequently in women. Due to the difficulty of differentiating a simple cyst and a hydatid cyst with the hepatic cystadenoma; as well as its recurrence and possibility of dysplasia or carcinoma, if it is not treated by complete resection. We present the case of a 56-year-old woman with a history of simple hepatic cyst treated on two occasions with simple deroofing which caused relapsed since it was a hepatic cystadenoma
Key words:Hepatic cystadenoma; Liver cystadenocarcinoma; Ovarian stroma; Tomography (CT); Nuclear magnetic resonance (NMR).(source: MeSH NLM)

INTRODUCTION
LCystic liver disease occurs between 3% to 20% of the population, whose incidence increases with age; being the simple cyst the most common pathology1,2. In 1887 Heuter described the first report of hepatic cystadenoma, which now accounts for less than 5% of all cystic lesions of the liver2,3 and its included in cystic neoplasms of the liver. It is more frequent in women, and in more than 85% it is diagnosed between the fourth and sixth decade of life4. These lesions are derived from the biliary epithelium that histologically is composed of three layers: An outer layer of collagen that contains blood vessels and nerves; a stromal layer "ovarian type," dense that includes muscle cells in addition to adipose tissue and a columnar epithelial layer (sometimes cubic secretory mucin)5,6. The most striking characteristic of this cystic tumor is the presence of an ovarian-like stroma below the epithelium of the cystic lining5. It is important to note that the epithelium can show high-grade dysplasia and progress to carcinoma from 20% to 30% of cases2-6. However, in most series, hepatic cystadenomas carry an extremely low risk of morbidity and mortality after adequate surgical resection7. Mucinous and serous are two types of hepatic cystadenomas that are pathologically described.

Traditionally, cystadenomas are believed to have originated from the biliary epithelium, possibly in a congenitally aberrant bile duct. Other possibilities are that tumors arise directly from embryonic cells or peribiliary endocrine cells8.

The primary differential diagnoses include simple hepatic cyst, hepatic cystadenocarcinoma, Caroli's disease, papillary mucinous neoplasia of the bile duct, hydatid cyst, post-traumatic hepatic cyst, polycystic liver disease, liver abscess5,8,10,11. The diagnosis can easily be confused with simple cysts or hydatid cysts due to its higher prevalence. We could provide a poor treatment for this condition, and the procedure would be inaccurate because a liver cystadenoma should be treated with complete surgical resection. They recur if residual tissue is left, and even only with the study of pathological anatomy of the entire cystic mass cystadenocarcinoma can be ruled out. Given the importance of differentiating this hepatic cystic neoplasia from other cystic diseases of the liver, we present the present clinical case.

MA 52-year-old woman, natural and from Lima, with no relevant medical history, but with laparoscopic surgery of simple cyst removal in 2002, whose pathology report was a simple serous cyst and in 2007 an exploratory laparotomy + unroofing of simple recurrent hepatic cyst + cholecystectomy with pathological anatomy as a simple hepatic cyst with fibrosis wall. In January 2018, she went to an outpatient clinic because of abdominal pain in the right hypochondrium of low intensity in the last 4 months, so a non-contrast-enhanced CT was performed (the patient was allergic to iodine), evidencing a hypodense multilocular lesion in segment IV A, IV B and V of 130 x 80 x 70 mm. No significant calcifications, no large vesicles inside, or dilation of the bile ducts.

The abdominal magnetic resonance showed a large multiloculated cystic image located in almost the entire left lobe of 126 x 80 mm, and this lesion displaces the vascular trajectories without infiltrating them. (Figure 1. E, F).

Her laboratory tests, such as hemogram, liver profile, biochemistry and tumor markers (CEA and Ca 19.9), were normal.

The patient was operated with the preoperative diagnosis of recurrent hepatic cystic tumor: cystadenoma versus cystadenocarcinoma. She underwent a pericystectomy + left hepatectomy + partial resection of the V segment + adhesion release. These procedures found multiple firm adhesions of omentum, duodenum and thin loop to the cyst wall, which involves segments II, III, IVA, IVB and partially the V of approximately 130 x 80 mm, with a whitish wall of 3 mm thickness containing liquid slightly yellowish and somewhat viscous in its interior and contacting intimately with the main bile duct and left hepatic branch. (Figure 2. G, H).

The pathology reports that she received a product of hepatectomy + pericystectomy: Liver with a cyst of 120 x 90 x 25 mm adjacent to segment III, with mucinous content in moderate quantity, 3mm wall with multiple cystic structures of 7 mm. It presents mucinous epithelium and ovarian stroma. Diagnosis: Mucinous cystadenoma without dysplasia or invasive component, surgical edges free of injury. (Figure 2. I, J)

The patient has a good recovery and left the hospital seven days after surgery. During the follow-up, the patient is asymptomatic, and there is no recurrence of the disease nine months after surgery. 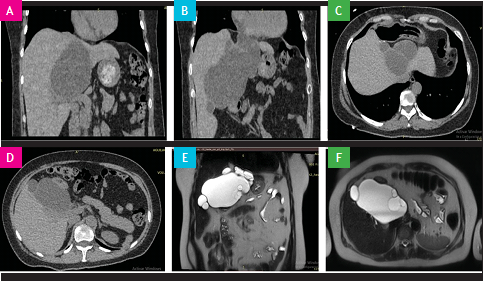 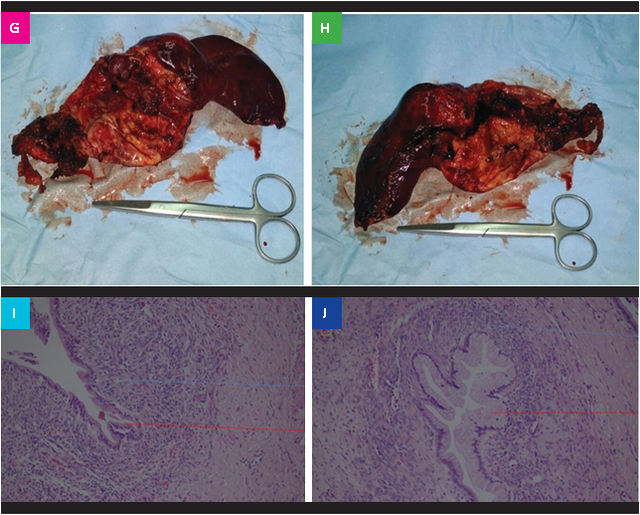 Figure 2.The operative part of the left liver and partial segment 5 with cystadenoma (G, H). Microscopy: Mucinous epithelium marked with a red arrow and ovarian stroma indicated with a blue arrow (I, J).

Hepatic cystadenoma is a rare benign cystic disease, with less than 250 cases reported in the world literature2.

They appear as multilocular cystic lesions in up to 84% of cases, (rarely unilocular) and are surrounded by a smooth and thick fibrous capsule. These tumors contain numerous internal septa and intraluminal papillary projections, which are lined by a cuboidal or cylindrical biliary secretory mucous epithelium with a subepithelial ovarian stroma, described as pathognomonic by Edmondson in 19582,5,12-15.

True connections to the biliary tree are rare. However, 50% of mucinous cysts contain endocrine cells, suggesting that they may originate in pericardial intrahepatic glands6-8.

The clinical presentation can vary considerably. Many patients are asymptomatic up to 14%. Other patients present nonspecific symptoms such as most commonly abdominal pain, distension and palpable mass (55% to 90%)2,8,10,12.

Although laboratory values are normal in most patients, approximately 20% have evidence of impaired hepatic function, such as an abnormal level of bilirubin and GGT due to compression of the bile duct, causing obstructive jaundice and cholangitis, which is rarely presents8.

Immunohistochemical studies that include the estrogen receptor (positive up to 60-100%), the progesterone receptor and inhibin are useful to highlight the ovarian-type stroma and establish the diagnosis, especially in cases with hyalinized stroma. Immunohistochemical studies for cytokeratin 7 (CK7), CK8, CK18, CK19, CA-19-9 and AE1 / AE3 highlight the epithelium5-8-14.

Regarding tumor markers, CA19.9 and serum CEA has been shown to increase in some types of mucinous cystic tumors. This is not a universal finding and therefore should not be used as a diagnostic parameter16. The same tumor markers obtained through the puncture of the cyst give sensitivity and specificity of 100% and 94% respectively, however, there is a risk of peritoneal and pleural dissemination8, so it should not be performed

Within the imaging examinations, the characteristic feature of CT is a solitary complex cystic mass with a well-defined thick fibrous capsule, with some calcifications on its walls, partitions internal and mural nodularity, reaching a sensitivity of 87% and a specificity of 100%6,15. The critical difference between cystadenoma or hepatic cystadenocarcinoma and a hemorrhagic or infected hepatic cyst is that the capsule, internal septa, and wall nodules show contrast enhancement in the first and not in the second. In general, mural nodules or polyps and pedunculated excrescences are more common in biliary cystadenocarcinoma than in biliary cystadenoma, however, mural nodules have been observed in biliary cystadenomas without evidence of malignancy in pathology2,5,10.

Regarding treatment: Aspiration, sclerosis, internal drainage, marsupialization or partial resection with or without ablation of the cavity can lead to a recurrence rate of up to 90 to 100%2-13. Due to the high rate of recurrence with partial resections and the difficulty of differentiating the cystadenoma from hepatic cystadenocarcinoma in the pre-operative period, since the pathological study of the entire cyst is the only one that can rule out dysplasia and carcinoma, it is recommended that radical surgical resection with negative margins; as was done in the case presented.

It is essential to take this pathology into consideration, so as not to confuse it with other cystic diseases of the liver, just as in this case it was treated twice as a simple cyst and recurred, since it was a cystadenoma; therefore, an excellent clinical study, images, and pathological anatomy must be carried out.

Authorship contributions: The authors participated in the generation, writing and final approval of the clinical case.