A 32-year-old woman admitted to the medical service with a clinical picture of recurrent biliary pancreatitis and symptomatic cholelithiasis. Abdominal ultrasound and cholangioresonance showed a gallbladder in an unusual position (posterior) and an anomaly of the biliary tree. Incidentally, the presence of an atrial septal defect associated with signs compatible with pulmonary hypertension is evident. We have not found in the literature an association between the presence of this gallbladder abnormality and the presence of atrial or other congenital heart disease.

The etiological study often needs to use invasive and expensive techniques, some of which are at risk of complications, including pancreatitis itself2.

Any cause that produces an episode of acute pancreatitis, can potentially produce a recurrence, especially if the proper treatment is not performed. In 7% of patients, several etiologies coexist, such as genetic predisposition with another obstructive or toxic factor3.

The etiology of RAP has been investigated in numerous studies, being alcohol and biliary lithiasis the most prevalent etiologies, encompassing 70% of cases4.

Acute biliary pancreatitis can be a cause of PAR when it is not recognized in a first episode since the sensitivity of abdominal ultrasound to detect lithiasis decreases during the acute episode, and it is recommended to repeat it once resolved. Magnetic resonance imaging (MRCP) may be useful to detect gallstones in the bile ducts, although its sensitivity is lower to detect small size stones5.

Several drugs are implicated in the etiology of recurrent acute pancreatitis. Hypertriglyceridemia with levels higher than 1000 mg / dL can be a cause of PAR due to hereditary or alcoholic causes5.

Likewise, tobacco has been described as an independent factor of PAR. Genetic factors may play a role in the cause, evolution, and recurrence of pancreatitis.

The genes involved are the cationic trypsinogen gene (PRSS1), the serine protease inhibitor gene Kazal type 1 (SPINK1), the cystic fibrosis transmembrane conductance regulator gene (CFTR) being present in 50% of pancreatitis idiopathic chronicles6. Celiac disease is a rare cause of PAR associated with inflammation and obstruction of the papilla7.

Autoimmune pancreatitis is a systemic fibroinflammatory disease that can affect the pancreas8.

The pancreas divisum is a frequent congenital anomaly, with a prevalence of 7-14%9.

The dysfunction of the sphincter of Oddi as a cause of a PAR is still controversial. Pancreatic or ampullary neoplasms may be a cause of PAR due to obstruction of the pancreatic duct. Neuroendocrine tumors, cystic neoplasms, intraductal papillary mucinous neoplasia (NPMI), and pancreatic adenocarcinoma may be the cause of pancreatitis in about 2% of patients10-11.

The alterations or congenital anatomical varieties of the extrahepatic biliary tract have great relevance from the surgical point of view, the anatomical variants observed, such as multiple biliary vesicles, folded, multiseptate, and vesicular agenesis, unusual location; aberrant bile ducts, double cystic duct, or of great length; and choledochal cysts, among the most frequent12.

We present the case of a patient with a gallbladder of unusual location, with biliary tree anomaly associated with recurrent acute biliary pancreatitis and atrial septal defect.

Female patient of 32 years, a native of Junín, coming from Lima, occupation housewife, cohabiting, with antecedents of vesicular lithiasis and acute pancreatitis in two opportunities 4 and 3 months before their entrance respectively. She started the current episode 12 hours ago in a progressive manner characterized by pain in the epigastrium of lumbar irradiation, of moderate-intensity and associated with nausea and vomiting, which did not yield to symptomatic patients and which leads her to the emergency department. Patient enters through the general surgery service; during the clinical examination, the patient finds stable vital functions, afebrile, awake, lucid, oriented in space-time and person, plaintive; icteric dye of mucous and sclera is evident, there is no alteration in the respiratory system and a systolic murmur is heard in pulmonary focus and tricuspid of intensity III / IV; in the abdomen there is evidence of palpation pain in the epigastrium, decreased hydroaerial sounds and a negative Murphy sign. The rest of the physical examination was not contributory.

With the known antecedents and the defined clinic the diagnosis of acute biliary pancreatitis arises, auxiliary tests are requested for confirm the diagnosis and it is medicated with analgesics and antispasmodics.

The chest radiograph (Figure 1) showed the prominence of the pulmonary cone suggestive of pulmonary hypertension. Abdominal ultrasound showed liver of usual size and shape, of parenchyma with conserved echogenicity, with slight dilatation of extrahepatic bile ducts; choledochal 8 mm. The gallbladder is in a non-habitual position, in the projection of segment VI that measures 46 x 20 mm in diameter, thin-walled and with multiple lithiasis images in its interior that project posterior acoustic shadow. The pancreas of normal size with irregular edges and slightly heterogeneous echotexture, head 18mm body 8 mm. Colangioresonance (Figures 2 to 4): Gallbladder of 7 x 22 cm, thin-wall occupied by multiple stones smaller than 10 mm. Gallbladder and hepatic hilum displaced at the posterior and inferior level of the liver. The cystic duct is long. The intrahepatic bile ducts, the common hepatic duct, and the right hepatic ducts present dilation dilated choledochus (14 mm in diameter at the hilum and 6 mm intrapancreatic) without evidence of stones. The common bile duct ends in a fusiform shape in the second portion of the duodenum. Normal-looking pancreas. Transthoracic echocardiography: Atrial septal defect with a shunt from left to right.

Left ventricular systolic function preserved. Moderate growth of right cavities. Moderate pulmonary hypertension PSAP 50 mm hg. With the findings found, the patient was diagnosed with recurrent acute biliary pancreatitis associated with an abnormal location of the gallbladder and biliary tree anomaly, as well as an atrial septal defect with probable moderate pulmonary hypertension. The patient evolved favorably with remission of the clinical picture and normalization of the amylase, lipase, and liver profile figures, being transferred to surgery for cholecystectomy. 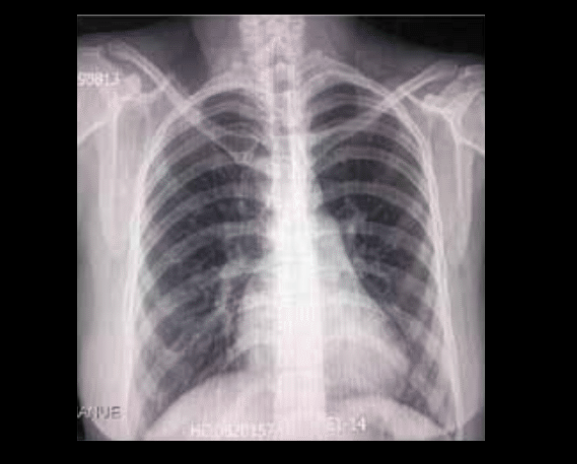 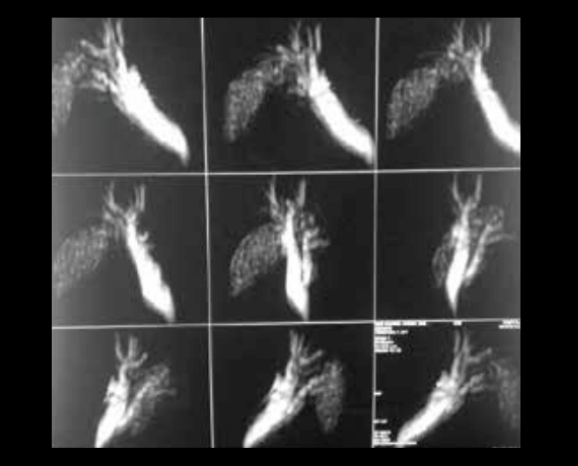 Figure 2. Cholangioresonance showing the presence of gallbladder occupied by stones associated with dilation of intrahepatic bile ducts and bile duct. 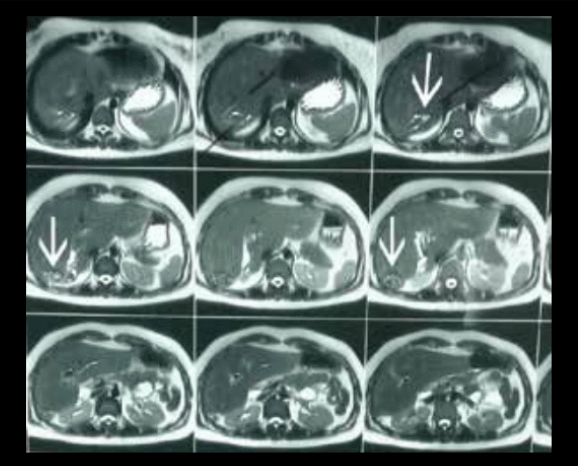 Figure 3. Axial image of cholangioresonance showing the posterior location of the gallbladder (arrows). 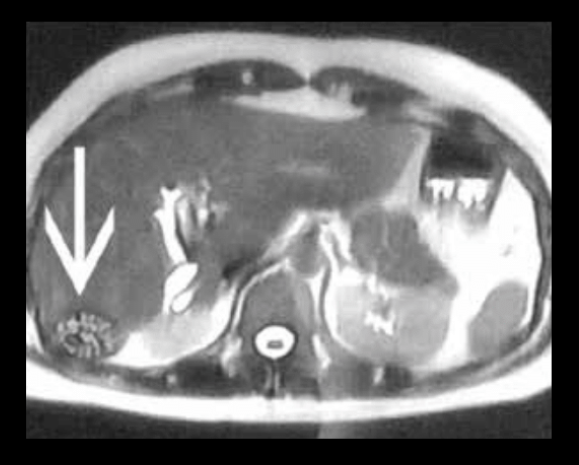 The most frequent causes of recurrent acute pancreatitis are alcohol consumption and cholelithiasis. In our patient, an abnormally located gallbladder was found in the lower hepatic posterior-region with a long cystic duct and dilation of the bile duct without the presence of stones inside, which ceased after a few days, so we can assume that there was a migration of a choledochal lithiasis or that was an Oddities associated with pancreatitis, the latter condition is also associated with cases of acute pancreatitis even in the absence of stones14.

Among the most frequently recognized abnormalities of the gallbladder is the ectopic location whose location Most frequent is intrahepatic, especially in the right lobe15.

Congenital anomalies of the gallbladder can be classified into alterations of location, of number and of developmental. The ectopic location has an incidence of 0.1-0.7%, being most frequently intrahepatic, in the right lobe15.

It is an anomaly of development that prevents the gallbladder from moving from its intrahepatic position in the second month of gestation to its normal superficial location16.

It presents an altered function because it does not empty what can result in the formation of gallstones due to stasis17.

Laparoscopic cholecystectomy is the surgical technique of choice in the intrahepatic gallbladder18.

The aberrant gallbladder or in an unusual place, although it is often discovered with the ultrasonography and the computerized axial tomography (CT), in others it is found during the surgical act.

In the case discussed, we consider that the presence in an abnormal anatomic location together with an elongated cystic are factors that may have contributed to the biliary stasis and the consequent formation of stones.

In cases of recurrent pancreatitis, an adequate clinical history should be guaranteed, recording the consumption of tobacco, alcohol, drugs, history of vasculitis, infections, trauma and family history of pancreatitis. The appropriate history, together with an appropriate physical examination is essential to assess the etiology of recurrent acute pancreatitis. Biochemical studies should include calcium, triglycerides, amylase, lipase and liver profile. Abdominal ultrasound is indicated to detect biliary lithiasis. It is recommended to repeat it after the initial episode if the ultrasound evaluation has been limited by the presence of ileus or pain, particularly in the absence of evident biliary pathology. Abdominal tomography is useful to detect morphological alterations of the pancreas such as the pancreas divisum as well as the extent and severity of pancreatitis, Wirsung dilation and the presence of neoplasia. It is worth mentioning that in 7% of patients with recurrent pancreatitis several etiologies coexist.

The patient also presented as an incidental finding the presence of an atrial septal defect associated with echocardiographic findings suggestive of moderate pulmonary hypertension. Although the coexistence of interatrial communication with gallbladder agenesis has been reported19,20, we have not found other reports in the literature on coexistence with abnormalities in the location of the gallbladder.


Authorship Contributions: The authors participated in the generation, collection of information, writing and final version of the original article.

Interest conflict: The authors declare no conflicts of interest in the publication of this article.