EXPOSED MIDFOOT FRACTURE DUE TO TRAFFIC ACCIDENT IN HIV/AIDS PATIENT

Currently there is a high incidence of traffic accidents in the world, many of them cause severe disability in people. These limb injuries cause high morbidity even reaching an amputation. This is aggravated in HIV/ AIDS patients, especially in treatment and evolution. A clinical case of a patient with severe midfoot injury that ends in amputation is presented and a surgical management review of the trauma patient with HIV/ AIDS is made.

Each year approximately 1.35 million people die from traffic accidents; of these, between 20 and 50 million suffer non-fatal trauma with a permanent disability(1). In Peru, the numbers of injuries due to traffic accidents during 2018 were 61,512 and 32,449 deaths(2).

Injuries to the midfoot region comprise approximately 5% of foot trauma. Most of these are high energy trauma injuries. In general, midfoot injuries involve multiple fractures or luxo-fractures. Up to 30% of midfoot injuries are treated late, with worse results(3).

In surgical specialties, the general surgery service has a higher number of exposures to HIV (17.5%), followed by trauma (14.6%). Internal medicine presents 15%(7).

The impact of the disease in trauma patients with surgical intervention has not yet been fully clarified(8). There is conflicting evidence that HIV status, whether or not it includes a compromised CD4 count, increases the likelihood of infection or other adverse perioperative events in elective surgeries(9). The concern may be even greater for emergency patients given the potentially unstable nature of the trauma suffered(10).

Taking into account the above, the purpose of this clinical case is to expose the therapeutic approach of crushing exposed foot fracture in an HIV / AIDS patient, to show the treatment provided and to describe biosafety measures to be used in the management of a traumatic patient with HIV AIDS.

PRESENTATION OF THE CASE

18-year-old male patient, natural and from Ciudad de Dios (Pacasmayo), who has a history of diagnosis of HIV without antiretroviral treatment (ART) at the Guadalupe hospital two months earlier. While waiting for passengers at the bus stop, he was pushed by a companion against a moving trailer, which was transporting stones, passing the rear tire over his left foot. He presented pain, edema, tendon-bone exposure and wound with active bleeding, so he was transferred to a medical post for first aid and later referred by emergency to the Trujillo Regional Teaching Hospital (HRDT) for better definitive management.

Three hours after the accident, he arrived at the HRDT awake and with stable vital signs. A continuity solution of approximately 10x10 cm was evident with exposure of the tendons, muscles, and bones of the tarsus and metatarsus of the left foot, pain of moderate-intensity, mobility of the IV and V toe, decrease in the posterior tibial pulse and non-palpable pedio pulse; He also had a deep wound on the medial and lateral sides of the left knee. Triple antibiotic treatment was established: Cefazolin, Gentamicin, and Penicillin G sodium.

Plain radiographs of the left foot were requested in two projections, finding Luxo-fracture of the scaphoid and 1st and 2nd wedge (figura 1).

Two surgical cleanings were performed under anesthesia, followed by amputation from the midfoot through the area of ​​necrosis (figura 2). In the preoperative period, the patient was hemodynamically stable with mild anemia (hemoglobin 9 gr/dl, platelets 266000 x mm3, hematocrit 27.7%, creatinine 0.7 mg/dl, LDH 577 IU). At the surgical time, all biosecurity measures were applied due to the high risk of HIV infection: use of disposable material, sterile gloves, glasses, disposable clothing and disposable sterile fields. In the first surgery, in the affected area of ​​the left foot, a wound with foreign bodies (dirt, stones), was cleaned with 10 bottles of 0.9% sodium chloride and 1% povidone foam iodine. Then, percutaneous fixation was performed with 2 Kishner needles of the cuneiform bones, from the forefoot to the hindfoot (figura 3). In the postoperative period, treatment with vacomycin and meropenem was administered.

After 2 days, a second surgical cleaning was carried out, showing various areas of necrosis (figura 4) which led to debridement, loss of skin, subcutaneous cell tissue and muscle. It no longer had a bad smell. After 6 days of cleaning, the midfoot and forefoot were amputated, where there was an area of ​​necrosis (figura 5). There were no complications during the surgery. The patient underwent surgery twice for stump remodeling, after 15 days an open wound measuring 15 x 10 cm was observed with granulation tissue in the hindfoot stump. Continue with daily healings. 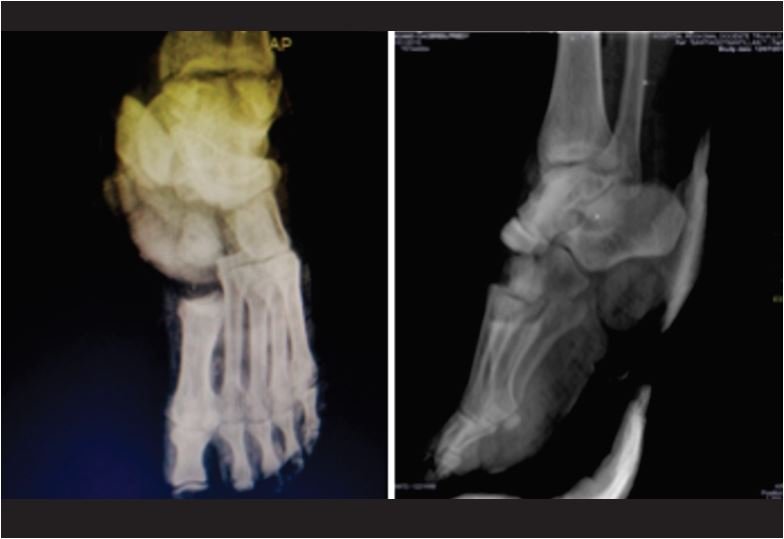 Figure 1. Radiographs of the left foot in anteroposterior and lateral position 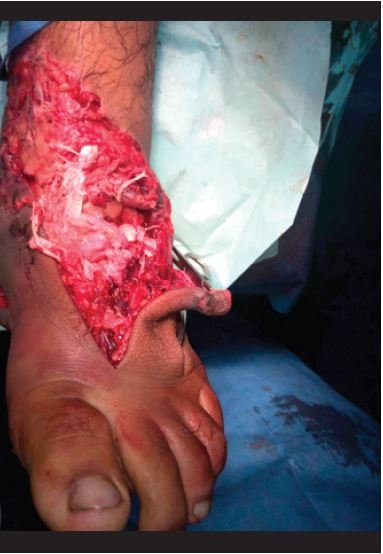 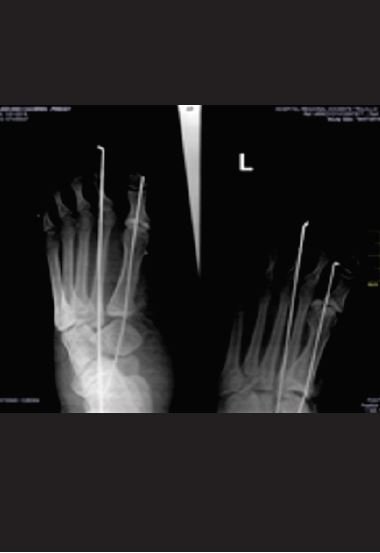 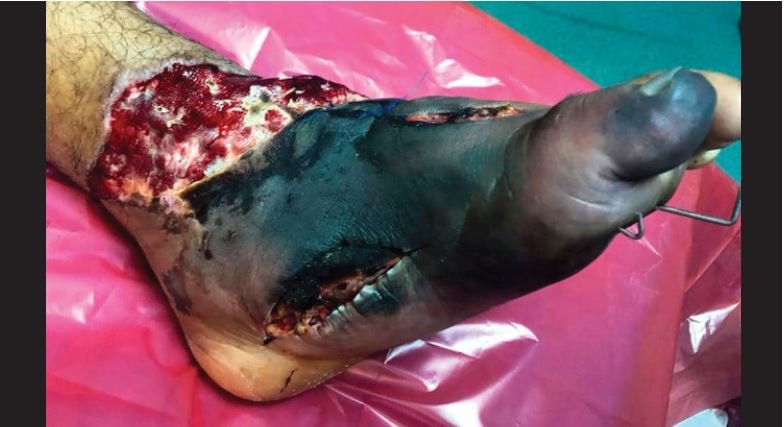 The ATLS (Advanced Trauma Life Support)(10) details a series of strategies to treat musculoskeletal injuries. In the case of open fractures and open joint injuries, there is a big problem, bacterial contamination makes them prone to infection, difficult to heal and sequelae in function. For which, he mentions, the wound particles should be removed as soon as possible, covering it with a moist sterile dressing; apply appropriate immobilization afterward and determine any associated soft, circulatory, and neurologic involvement. They should be treated as soon as possible with intravenous antibiotics using maximum doses, the first-generation cephalosporins are preferred(11). Delaying antibiotic administration beyond three hours is related to an increased risk of infection(11). In the patient, intravenous antimicrobial treatment was started with cefazolin, gentamicin, and penicillin g sodium 4M for 8 days, he never had a fever, however, there was pain, flushing, swelling of soft tissues, bad odor, which could complicate possible pyomositis, gangrene, osteomyelitis, among others, over time, thinking of more frequent germs such as Staphylococcus aureus and Clostridium perfringes, among others, for which reason a Rev. Fac. Med. Hum. 2020; 20 (2): 144-149. Exposed fracture of the midfoot due to a traffic accident in a culture HIV / AIDS patient plus an antibiogram.

In the Gustilo and Anderson classification, the patient presents a grade IIIC due to the extensive and contaminated wound, with vascular and nerve damage(13). This degree of exposed fracture presents a poor prognosis for the patient. The MESS (Mangled Extremity Severity Score) estimates the viability of an extremity after trauma, to determine the need for rescue versus amputation. This score is obtained from the sum of points obtained in 4 parameters, which are: bone and soft tissue injury, limb ischemia, hemodynamic status and age(14). In this case, it is an 18-year-old patient, a systolic pressure over 90 mmHg, without a pedic pulse, with sensitivity in the area of ​​injury, and high-energy trauma, so his total score was 6 points. The scale suggests that a score greater than or equal to 7 is predictive of amputation. However, many authors question the use of the MESS score because it does not replace the experience of the surgeon. Langer and Bosse determined that MESS had low sensitivity (46%). Regarding early amputation, this becomes relevant because performing it early reduces the risk of complications after the intervention, the recovery time and adaptation of the patient, and improves the patient's quality of life.

In the patient, a Chopart disarticulation was carried out with the preservation of the heel pad to treat the area of ​​necrosis of the midfoot and forefoot. Besides, the best possible functional prognosis was sought, this amputation being the choice from rehabilitation by allowing distal weight unloading, which is highly advantageous in prosthetic preparation and makes the weight load on the remaining limb during walking much better tolerated than at the transtibial level. The drawback of this amputation is that it has a bulky distal end, which can be complicated on a cosmetic level, but the functional advantages outweigh the aesthetic impediments(15).

Regarding biosecurity, all exposure to contaminated body fluid carries a risk of HIV transmission, increasing in the following circumstances: if the penetration, the puncture injury occurred with a hollow needle instead of a solid one, if it was a deep penetration of soft tissues, if blood was visible on the needle if the patient is in the early stage of viremia or the patient has advanced AIDS (both have high levels of viral loads) and in case of prolonged exposure (blood in a glove)(15). The use of two pairs of gloves reduces the risk of contamination by body fluids since 98% of the blood could be removed and this will also compensate for defects in the glove material. Simple techniques to reduce occupational risk include electrocautery cutting, avoiding the passage of sharp objects hand to hand, and the dogma that hands should never be used as tissue retractors.

Therefore, the patient with an exposed IIIC fracture, according to Gustillo and Anderson, as a result of a crush injury. With a severe commitment of one or more extremities, it should not only be addressed thinking about saving a life, but also about the individual and his future process of family, social and labor reintegration; it was decided to perform the amputation. Currently, treating patients with HIV infection consumes more resources, in addition to contagion dangers. However, if the situation requires it, the surgeon must take risks to improve the well-being of others, such as the case presented, following universal and specific biosecurity measures. Therefore, the surgeon must act thinking about the functional prognosis, based on the current evidence, achieving better results in all areas of the life of the person we are treating.

Authorship contributions: The authors participated in the genesis of the idea, project design, data collection and interpretation, analysis of results and preparation of the manuscript of the present research work.
Financing: Self-financed.
Conflict of interest: The authors declare that they have no conflicts of interest in the publication of this article.
Received: January 4, 2020
Approved: March 17, 2020

Do you want to leave your comment or suggestion about this article?