Table 1. Distribution of the sample of university professors according to comparison groups and sex.

Table 2. Descriptive statistics of biochemical markers, according to comparison groups.

Table 3. Comparative table of medians of biochemical markers and abnormal values between both groups. 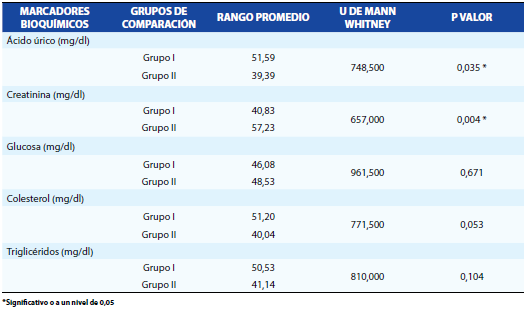 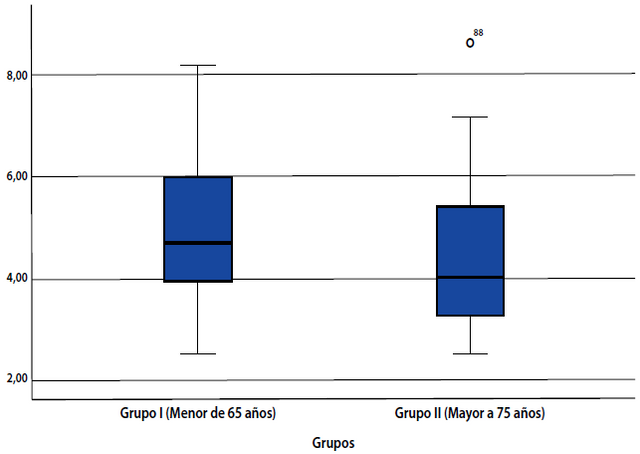 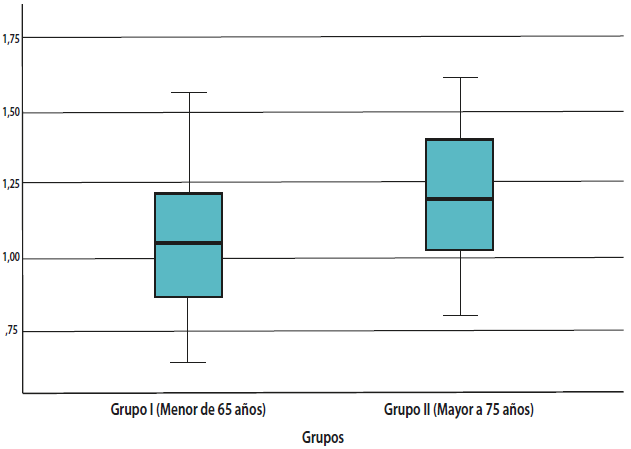 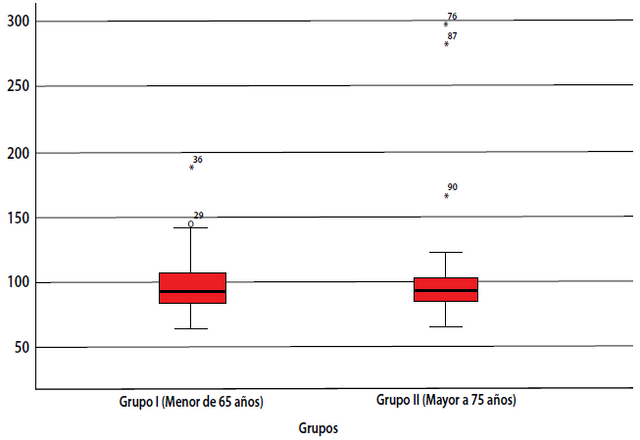 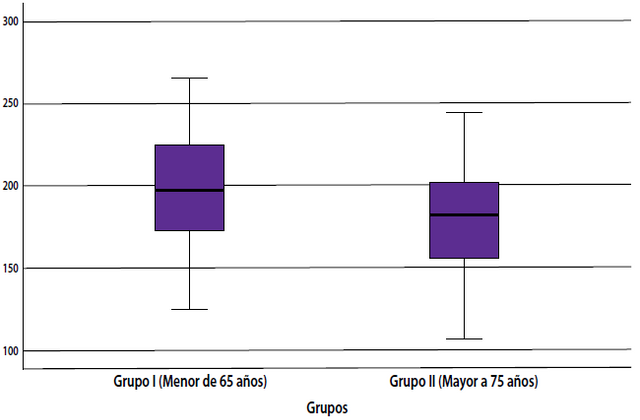 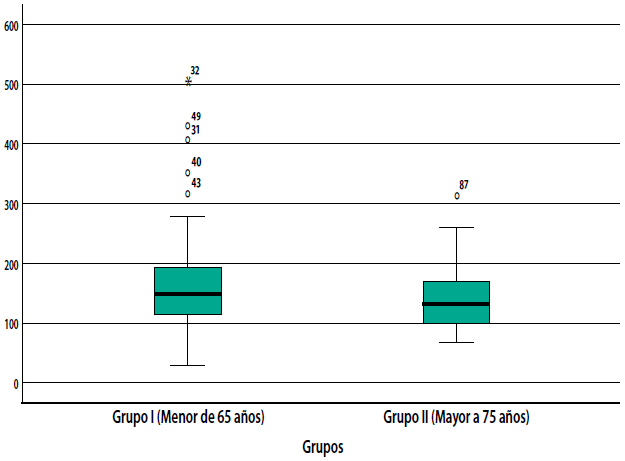 Creatinine is a metabolite that makes a blood level quite stable over time; therefore, it is a useful marker that is used clinically to evaluate renal function. The median creatinine, in both groups, was in the normal range; although group II values were 20% higher, with a maximum of 1.6 mg/dL. This small increase in group II has a statistical significance (p = 0.004) in the Mann Whitney U test, table 4. Our results are following what was indicated by Sebastiani P.5, who after evaluating 5,000 elderly adults, finds that non-protein nitrogen and cystatin (protein that measures glomerular filtration) increase with age. The medians of the blood glucose figure of both groups are similar, and there is no statistical difference (p = 0.671), table 4. Seven professors were found in Group I (12%) and in Group II six professors (17%) with glucose levels higher than normal; levels that require complementary studies to diagnose Diabetes Mellitus (DM). The Villena JE6 communication mentions that DM affects 7% of the population in Peru and that the prevalence of metabolic syndrome in the elderly is much higher than in other human groups. The blood level of cholesterol is a frequent concern of older adults since it is directly related to obesity7, arterial hypertension8, osteoporosis9 and the state of the vascular endothelium.
The medians of the cholesterol number in group I and II are in the range of normality, and there is no statistical difference (p = 0.053) in the Mann Whitney U test, table 4. But, 24 (41.3% ) teachers of group I, and 10 (28.5%) of group II have cholesterol figures above the normal range; possibly related to community eating habits. Although, Zanchetti A.8, evaluating 5,376 patients older than 64 years old, finds a prevalence of hypercholesterolemia with arterial hypertension, which justifies knowing the blood cholesterol level. The triglycerides that are determined in peripheral blood are, mostly, coming from the daily intake10; therefore, the high triglyceride levels are an expression of food disorder, which leads to dyslipidemia. The triglyceride medians, in both groups, are below the normal upper limit, and there is no statistically significant difference (p = 0.104) in the Mann Whitney U test, Table 4. Even so, in group I, there was 31 (53.4%) professors, and in group II, 10 (28.5%) of professors with figures above normal. The clinical importance of the triglyceride blood levels in older adults is valid. In addition to the dyslipidemia syndrome, and malnutrition as indicated by Amador-Licona N.11, which finds 93% of lack of nutrition in older adults (65 to 85 years old) with hip fracture, and low muscle strength, associated with the metabolic syndrome. On the other hand, Choi HJJ12, evaluated the cognitive activity of 59 older adults who had hypertriglyceridemia, finding a particular association, which suggests that the high level of triglycerides plays some role in cerebral amyloidosis. The evaluation of health that is made to the professors measures the functional status of various organs, but it does not measure the mental qualifications necessary to exercise satisfactory teaching jobs.
CONCLUSION
In the biochemical markers of uric acid and creatinine, there is a significant difference between both age groups. Uric acid levels are higher in group I, while creatinine levels are higher in group II. Although most of the determinations were in the normal range in both groups.
For glucose, cholesterol and triglyceride markers, no significant difference between the two age groups was determined. Despite the percentage of higher than normal figures were observed: 12%, 41.3%, and 53.4% respectively, in group I; and 17%, 28.5%, and 28.5% respectively, in group II.

Authorship contributions: The authors participated in the generation, writing and final approval of the original article.

Conflict of interes: The authors declare no conflicts of interest in the publication of this article.